10 Unmissable Things to Do at the Pyramids of Giza 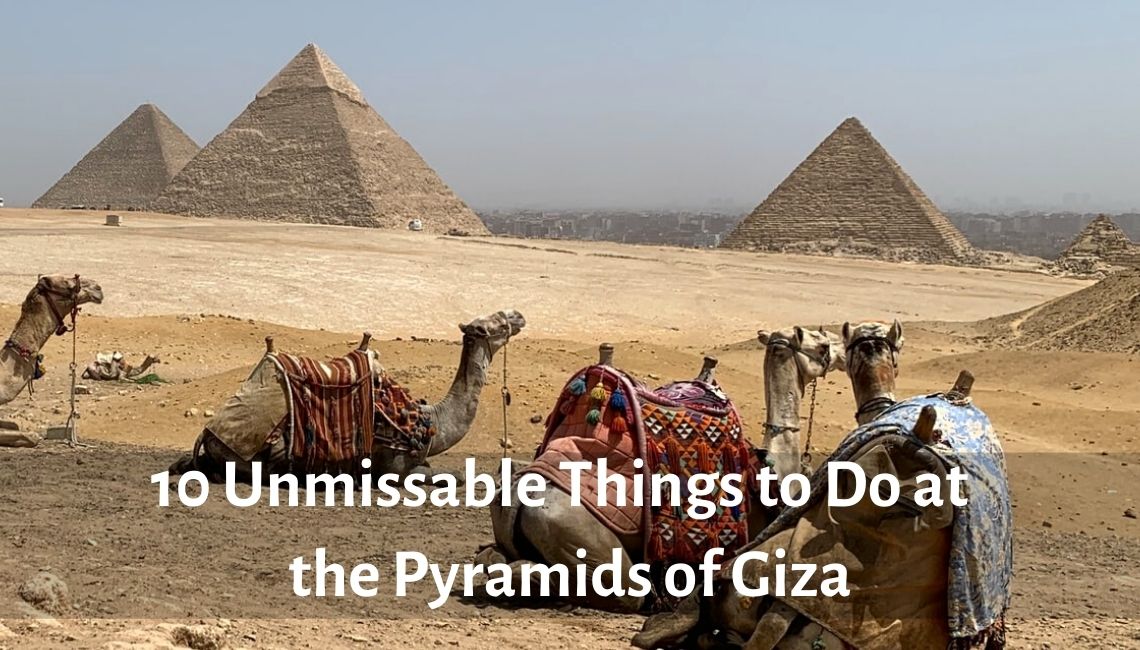 10 UNMISSABLE THINGS TO DO AT THE PYRAMIDS OF GIZA

If you are planning a tour of the Great Pyramids of Giza, how do you decide what to see and do?

This bucket list contains 10 of the best experiences you can have at the Giza Pyramid Complex.

SEE THE GREAT PYRAMID OF GIZA

Egyptologists believe that the pyramid was built over a 10 to 20-year period concluding around 2560 BC.

Initially standing at 146.5 meters (481 feet), the Great Pyramid was the tallest man-made structure in the world for more than 3,800 years until Lincoln Cathedral was finished in 1311 AD.

The Great Pyramid is made of an estimated 2.3 million blocks of stone which most believe to have been transported from nearby quarries.

GO INSIDE THE GREAT PYRAMID OF GIZA

The entrance to the Great Pyramid is through the hole located on the north side of the pyramid.

CAN YOU TAKE PICTURES INSIDE THE PYRAMIDS OF GIZA?

You can take pictures inside the pyramids with your cell phone. Unfortunately, cameras are not allowed inside the pyramids. My suggestion is to safely store it inside your backpack and always be ready. I found out that the rules and regulations constantly change while I was traveling through Egypt.

IS GOING INSIDE THE GREAT PYRAMID OF GIZA WORTH IT?

You should go inside the Great Pyramid. It is one of those lifetime chances to experience the Ancient Wonder of the World. Once you enter, you will go up through the Grand Gallery until you reach the King’s Chamber. Inside the King’s Chamber you will be able to see a sarcophagus.

The sarcophagus is made out of one solid piece of  granite. You might wonder how was it transported through the narrow passages? Interestingly, there are claims that the Great Pyramid was built around the sarcophagus, rather than it being brought inside. 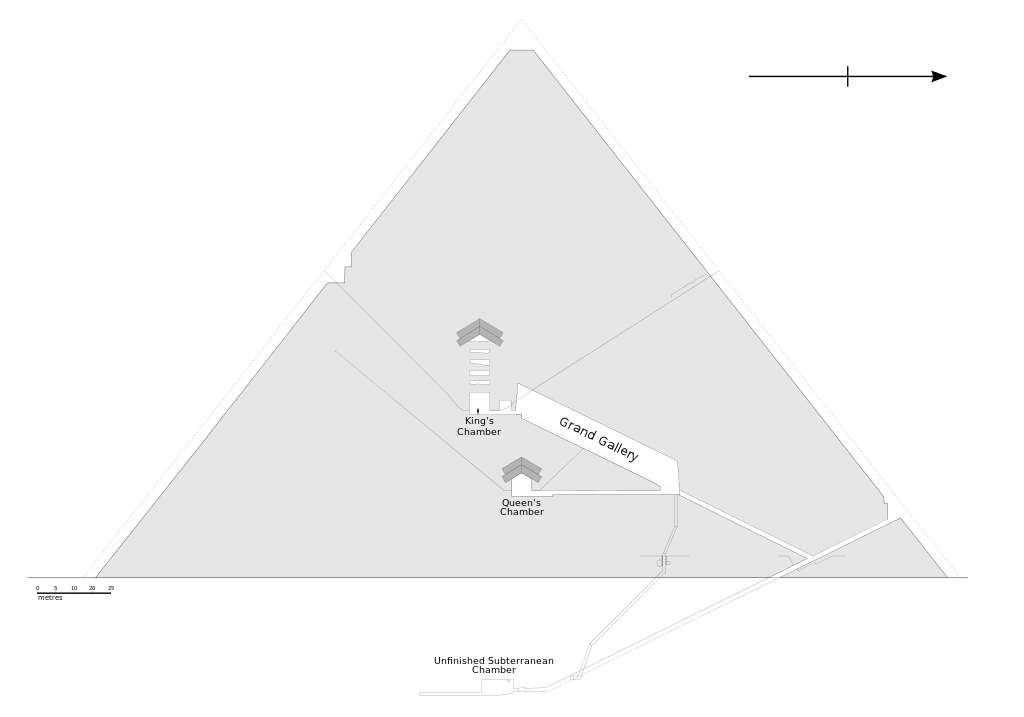 ARE YOU UP TO GOING INSIDE THE GREAT PYRAMID OF GIZA?

Make sure you are up to going inside the pyramid. The passages are narrow with no ventilation and poor lighting. On top of that, it gets crowded. If you are claustrophobic, or have breathing problems, then you definitely should skip it.

SEE THE PYRAMID OF KHAFRE

The Pyramid of Khafre or of Chephren is the tomb of the Fourth-Dynasty pharaoh Khafre (Chefren), who ruled from c. 2558 to 2532 BC.

It is the second-tallest and second-largest of the Pyramids of Giza. It rises up to a height of 136.4 meters (448 feet). However, if you look at it, it appears to be taller than the Pyramid of Khufu. It is because it sits on a bedrock, which is 10 meters (33 feet) higher than Khufu’s pyramid.

SEE THE PYRAMID OF MENKAURE

The Pyramid of Menkaure is the tomb of the Fourth Dynasty Egyptian Pharaoh Menkaure. Menkaure’s length of reign is uncertain. It is estimated that it lasted from 18 to 22 years starting in 2530 BC.

The Pyramid of Menkaure is the smallest of the three main Pyramids of Giza. It is estimated that the original height was 65.5 meters (215 feet). However, today it stands at 61 meters (204 feet).

WHO TRIED TO DESTROY THE PYRAMIDS OF GIZA?

Did you know that at the end of the twelfth century al-Malek al-Aziz Othman ben Yusuf, Saladin‘s son and heir, attempted to demolish the pyramids, starting with that of Menkaure?

Workmen recruited to demolish the pyramid stayed at their job for eight months, but found it almost as expensive to destroy as to build. They could only remove one or two stones each day.

Some used wedges and levers to move the stones, while others used ropes to pull them down. When a stone fell, it would bury itself in the sand, requiring extraordinary efforts to free it. Wedges were used to split the stones into several pieces, and a cart was used to carry it to the foot of the escarpment, where it was left.

Despite their efforts, workmen were only able to damage the pyramid to the extent of leaving a large vertical gash at its northern face.

BE AWED BY THE GREAT SPHINX OF GIZA

The Great Sphinx of Giza is a limestone statue of a reclining sphinx.

WHAT IS A SPHINX?

A sphinx is a mythical creature with the head of a human, a falcon, a cat, or a sheep and the body of a lion with the wings of an eagle.

The sphinx was viewed as benevolent but having a ferocious strength. It was thought of as a guardian and often flanked the entrances to temples.

The date of the construction of the Great Sphinx of Giza is not known for certain. Some theories state that the head of the great Sphinx shows the likeness of the Pharaoh Khafra. As a result, it is estimated that it was built between 2600 and 2500 BC.

WALK TO THE GREAT PYRAMIDS OF GIZA PANORAMIC SPOT

The Great Pyramid Complex is totally walk-able. Needless to say, make sure that you have comfy shoes. And, if you are visiting during summer months, make sure to wear a hat, carry plenty of water, and layer on the sunblock. 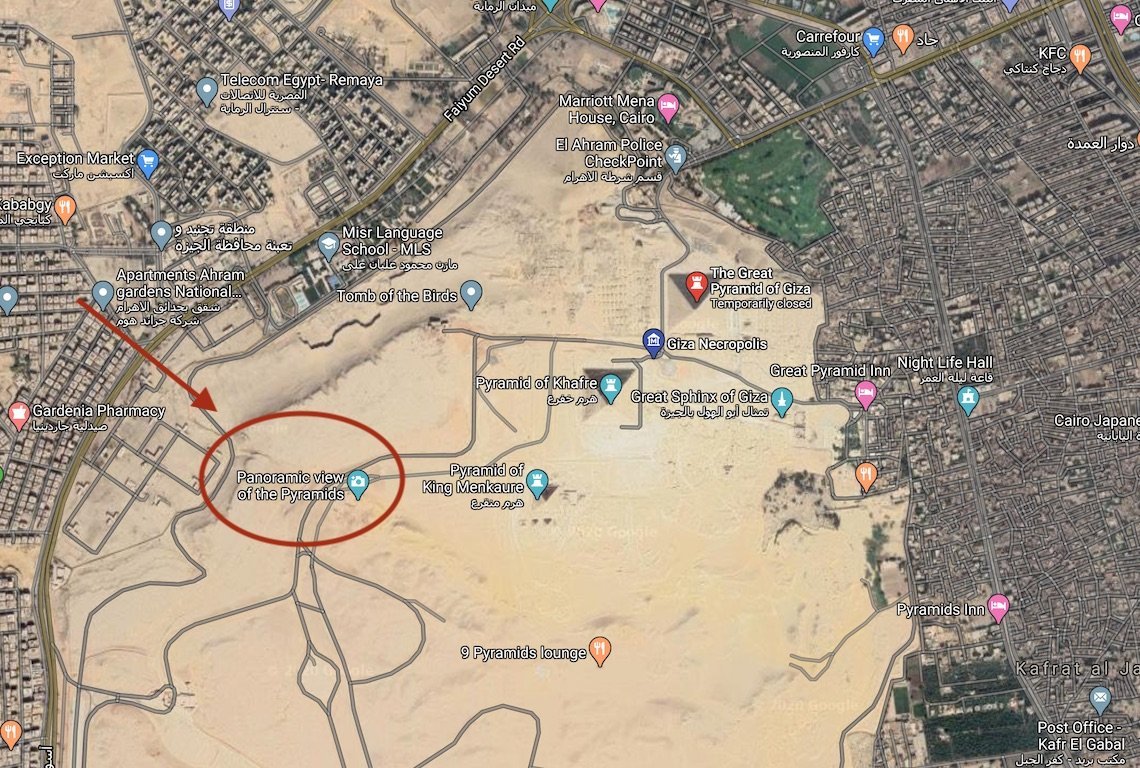 Once to get to the Panoramic Spot and you will be rewarded with the most spectacular views of the pyramids.

If you hired a private car and a guide, then the driver will take you to the Panoramic Spot. Whatever the case, do not miss it!

GO ON A CAMEL RIDE

Hands down, go on a camel ride! It is part of the experience.

However, before you get on the camel, negotiate the price of your ride and clarify where and how far you will ride. I suggest riding the camel to the Panoramic Spot and asking the camel handler to take a few of your pictures. There are plenty of camels to choose from. So take your time!

Getting on and off the camel can be a little tricky. Make sure to lean back as much as possible while the camel is getting up and kneeling down. Once you are situated, then it is a piece of cake. Just relax your body and off you go.

I had a great camel handler who took some pretty cool pictures of me on the camel!

I need to mention that if you have a sensitive nose, or have any allergies, then it might be a good idea to skip the camel ride. Camels pee on their legs, which adds to their pungent aroma. They do it on purpose to cool themselves down.

If you are not up to for a camel ride, then go on a horse-drawn carriage ride around the Great Pyramids of Giza. Before you get into the carriage, make sure to negotiate the price of your ride and find out all the details like how long the ride is going to be and where you are going to be taken.

My suggestion is to select the horse that is well taken care of. As you will see for yourself, some of the horses look worn out and malnourished.

There are three boat-shaped pits around the Great Pyramid of Giza. Egyptologists speculate that they once contained the complete boats. However, they disintegrated over time.

In May 1954, the Egyptian archaeologist Kamal el-Mallakh discovered a fourth boat pit. The pit was covered with slabs of stone which preserved 1,224 pieces of wood that were found inside.

It took Haj Ahmed Yusuf, an experienced boat builder, 14 years to put all the pieces together.

The result is a absolutely amazing cedar-wood boat that measures 43.6 metres (143 ft). 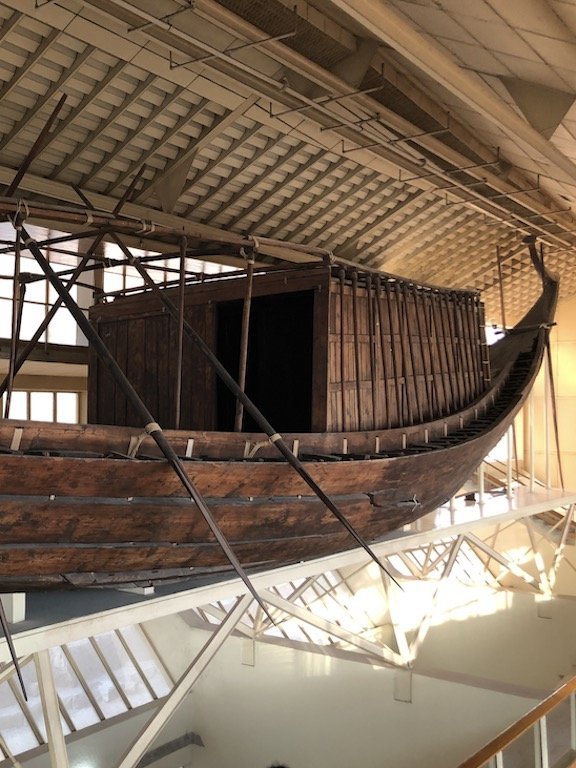 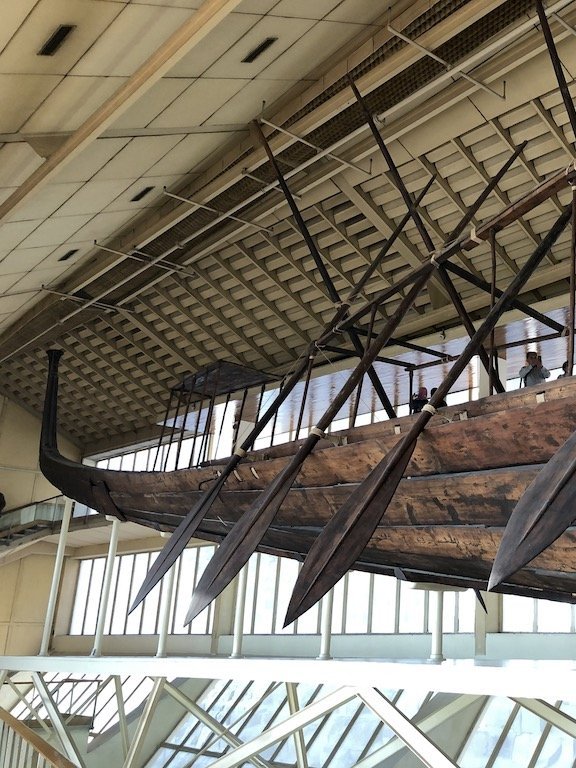 If you need some ideas for things to do at night in Cairo, then my suggestion is that you catch the Sound and Light Show at the Great Pyramid Complex. You will learn some interesting facts re-told by the Sphinx about the great builders of the pyramids:  Khufu, Khafre, and Menkaure.

Above all, you will be able to see the pyramids and the sphinx beautifully illuminated!

The shows lasts about hour and it is done in different languages. Check the schedule and the prices here.

INTREPID SCOUT’S POINTERS FOR THE GREAT PYRAMIDS OF GIZA

Now, if you only have a couple of hours, what are the most important things to do at the Pyramids of Giza? 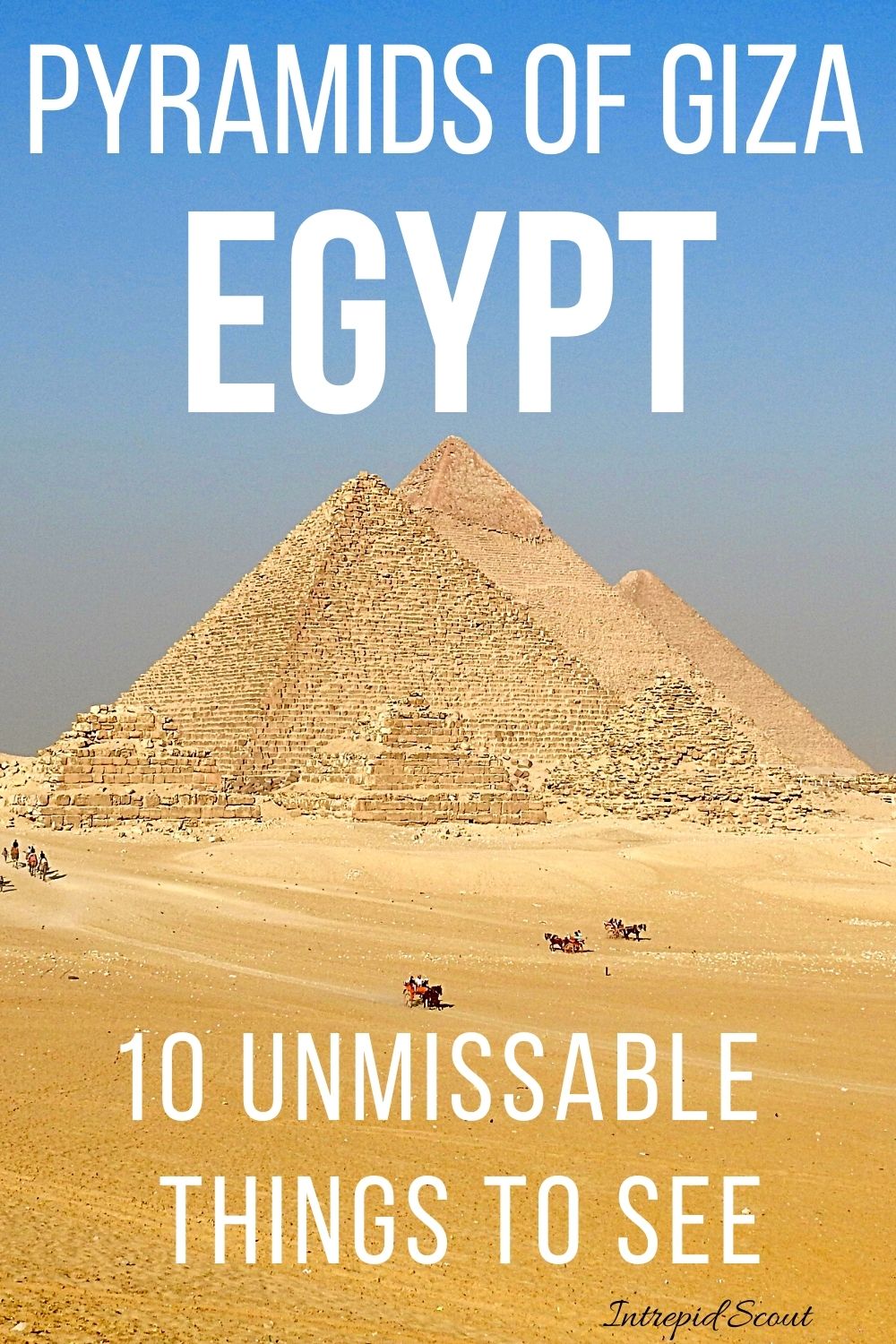 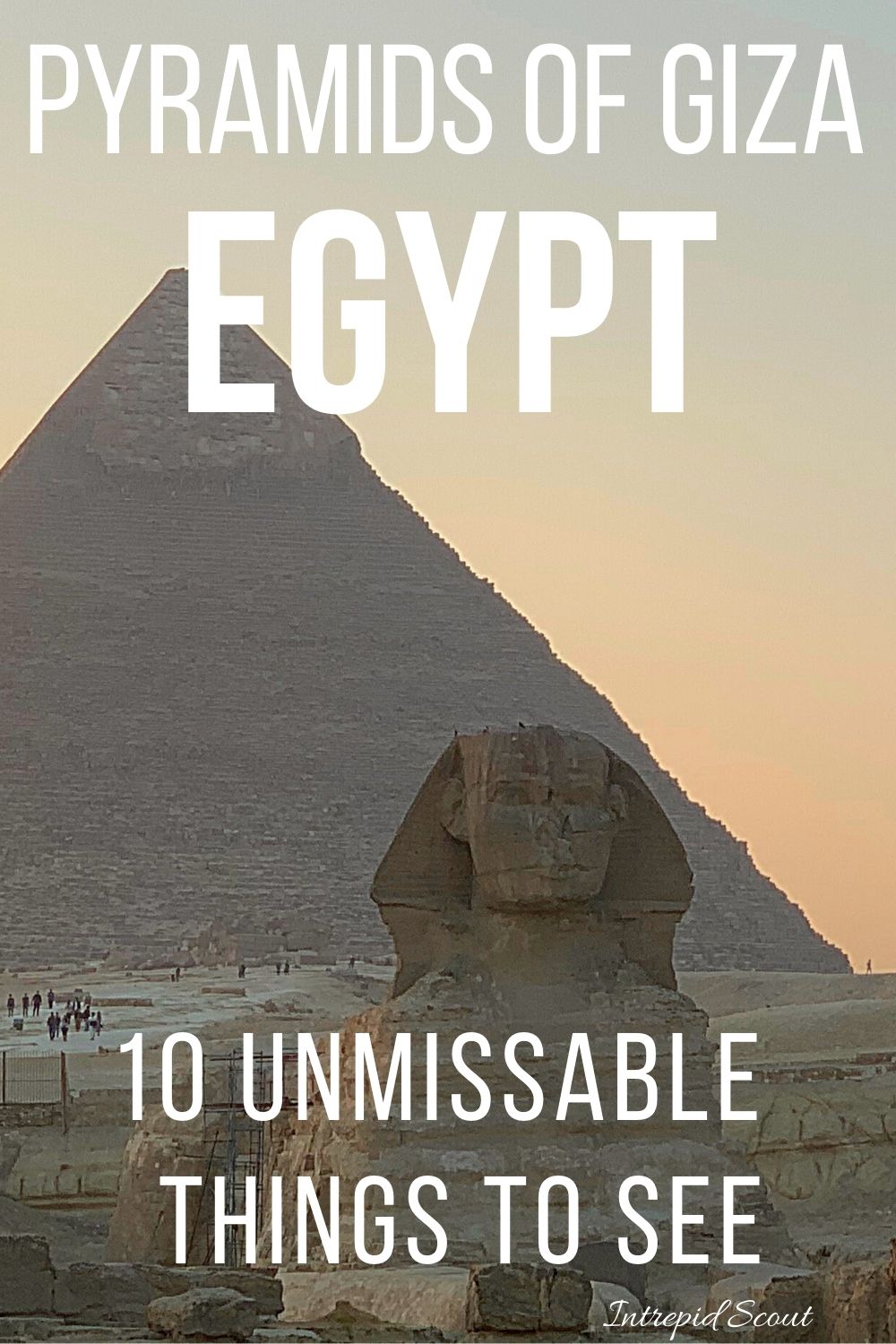