Best Day Trip From Cairo – Dahshur, Memphis and Saqqara (with MAPS and PHOTOS) 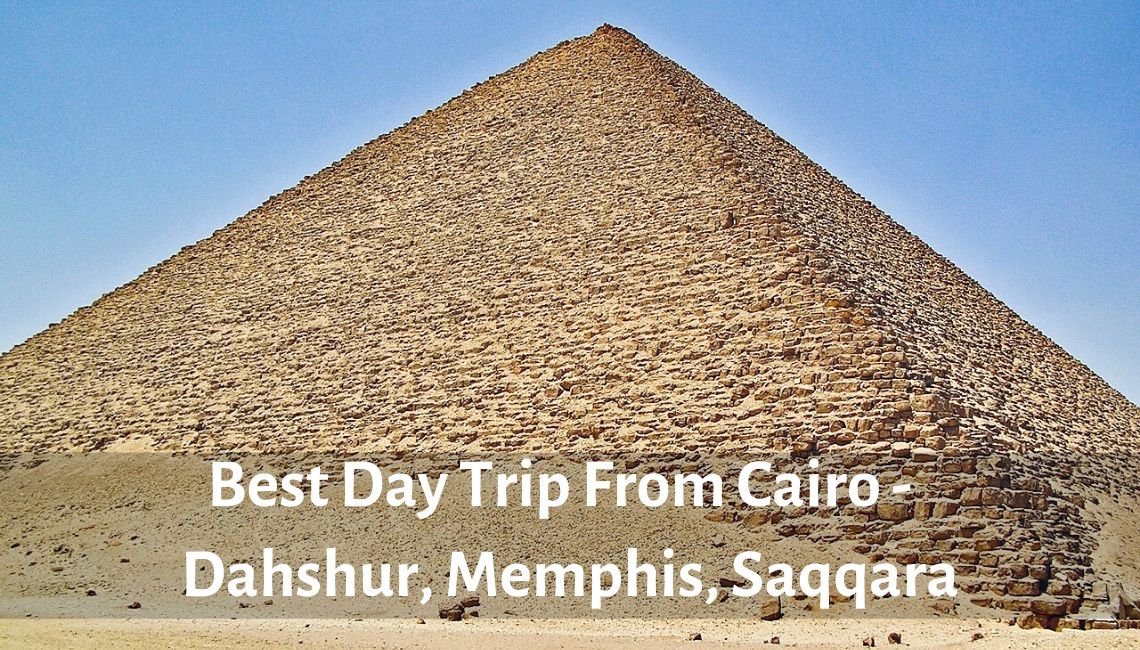 BEST DAY TRIP FROM CAIRO -
DAHSHUR, MEMPHIS AND SAQQARA (with MAPS and PHOTOS)

There is a lot to do in Cairo and you could easily spend a few days exploring the city.

Sometimes, it is nice to take a break from the busy city life and discover some places around it.

Here is my favorite day trip from Cairo during which you will explore Dahshur, Memphis and Saqqara!

WHAT IS THE ORDER YOU NEED TO SEE THESE SIGHTS?

MAP OF THE DAY TRIP FROM CAIRO

HOW TO GET TO DAHSHUR, MEMPHIS AND SAQQARA

I think that having a private driver and a guide is the best way to go on this day trip from Cairo and explore Dahshur, Memphis and Saqqara. This option gives you total flexibility. Also, having a knowledgeable guide by your side is simply invaluable.

Now, if you are staying in one of the hotels in Cairo, your hotel will be more than happy to arrange for you a driver and a guide. Needless to say, this is an expensive option, but it is all worth it.

You can ask your hotel for a day trip tour from Cairo that goes to Dahshur, Memphis and Saqqara. It is probably one of the least expensive options. But, it does not give you much flexibility.

Another option is to just book a taxi and head to Dahshur, then Memphis, and finally Saqqara. You will always be able to hire a guide right at the entrance to the Dahshur, Memphis and Saqqara Archaeological Sites.

Dahshur will be the first stop on your day trip from Cairo.

Dahshur is located about 35 km from Cairo. It should take you about an hour to reach Dahshur traveling by car from Cairo.

Dahshur is a royal necropolis and it is famous for its two pyramids, which are the Bent Pyramid and the Red Pyramid.

Both pyramids are one the oldest, largest and best preserved in Egypt.

The Bent Pyramid was the first pyramid built at Dahshur. It was built around 2600 BC under the rule of Pharaoh Sneferu.

Unfortunately, it proved to be an unsuccessful attempt at building a smooth sided pyramid.

So, if you look at the pyramid you can see that the bottom 147-foot section was built at a steeper 54-degree angle, while the top section was finished at a flatter 43-degree angle.

What is really cool is that you can get inside the pyramid! You will be able to get to its two chambers through a narrow approximately 79-metre (259-foot) tunnel. However, I need to mention that the tunnel is rather narrow and it changes its elevation at steep angles. Needless to say, make sure you are up to it!

ARE YOU UP TO GOING INSIDE THE BENT PYRAMID?

The Red Pyramid is named for its reddish color that comes from the red limestone that was used for its construction. However, as my tour guide told me, the pyramid was not always red! Actually, its color was white, since it was covered with the most exquisite Tura limestone.

WHAT IS TURA LIMESTONE?

By the way, you can still see some of these stones at the pyramid’s base. Unfortunately, most of the Tura limestone was taken and used for buildings in Cairo. As a result, the red limestone was revealed.

The Red Pyramid was built at 43-degree angle. It is the same angle as the upper portion of the Bent Pyramid was built. If you look at it, you can see that it has somewhat stumpy appearance compared to the other Egyptian pyramids. However, what is important here, is that it was the first successful construction of a smooth-sided pyramid.

You can go inside the pyramid through the entrance cut high on the north side of the pyramid.

The video will give you a pretty good idea what it is like inside the pyramid and if it is something that you would like to do. 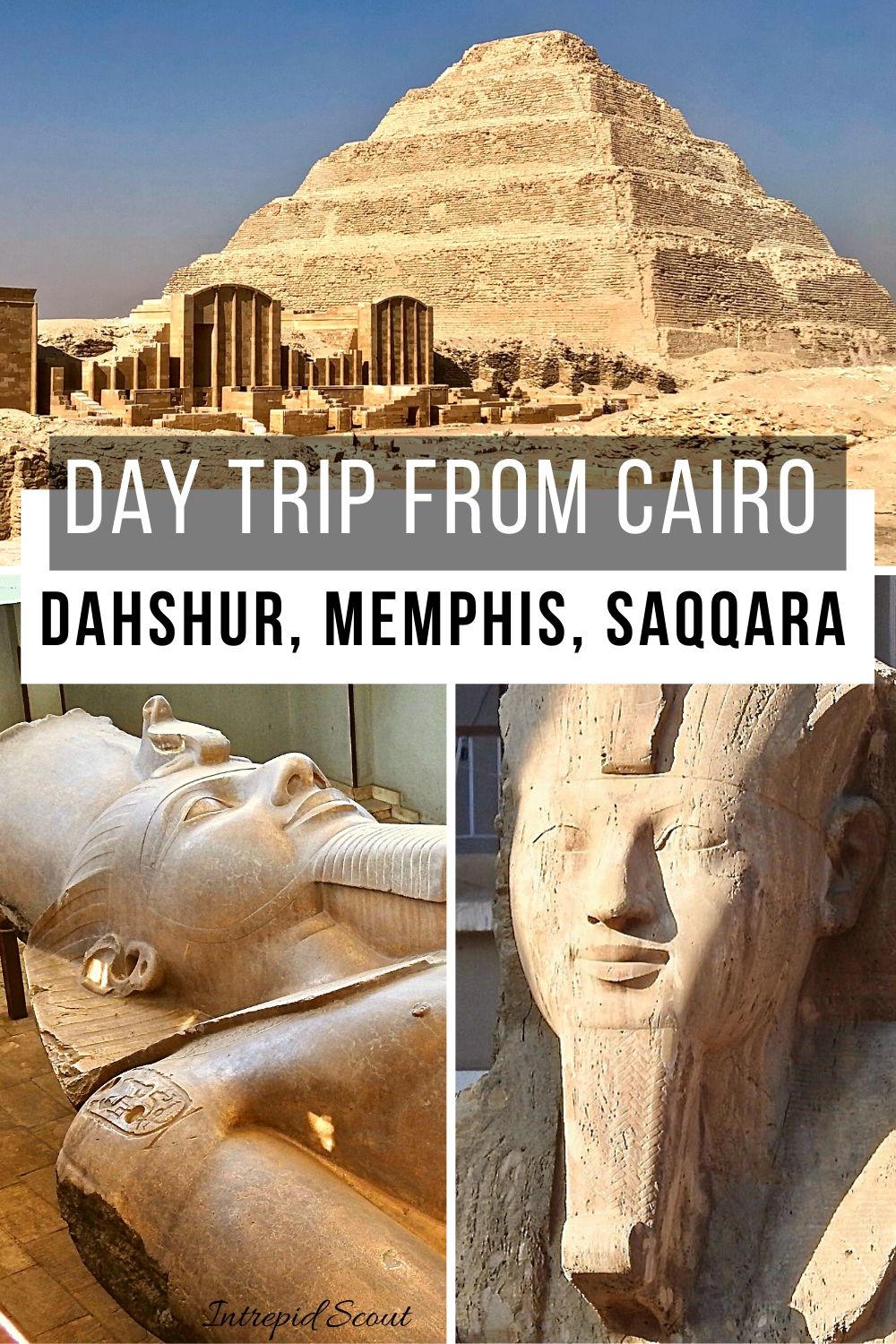 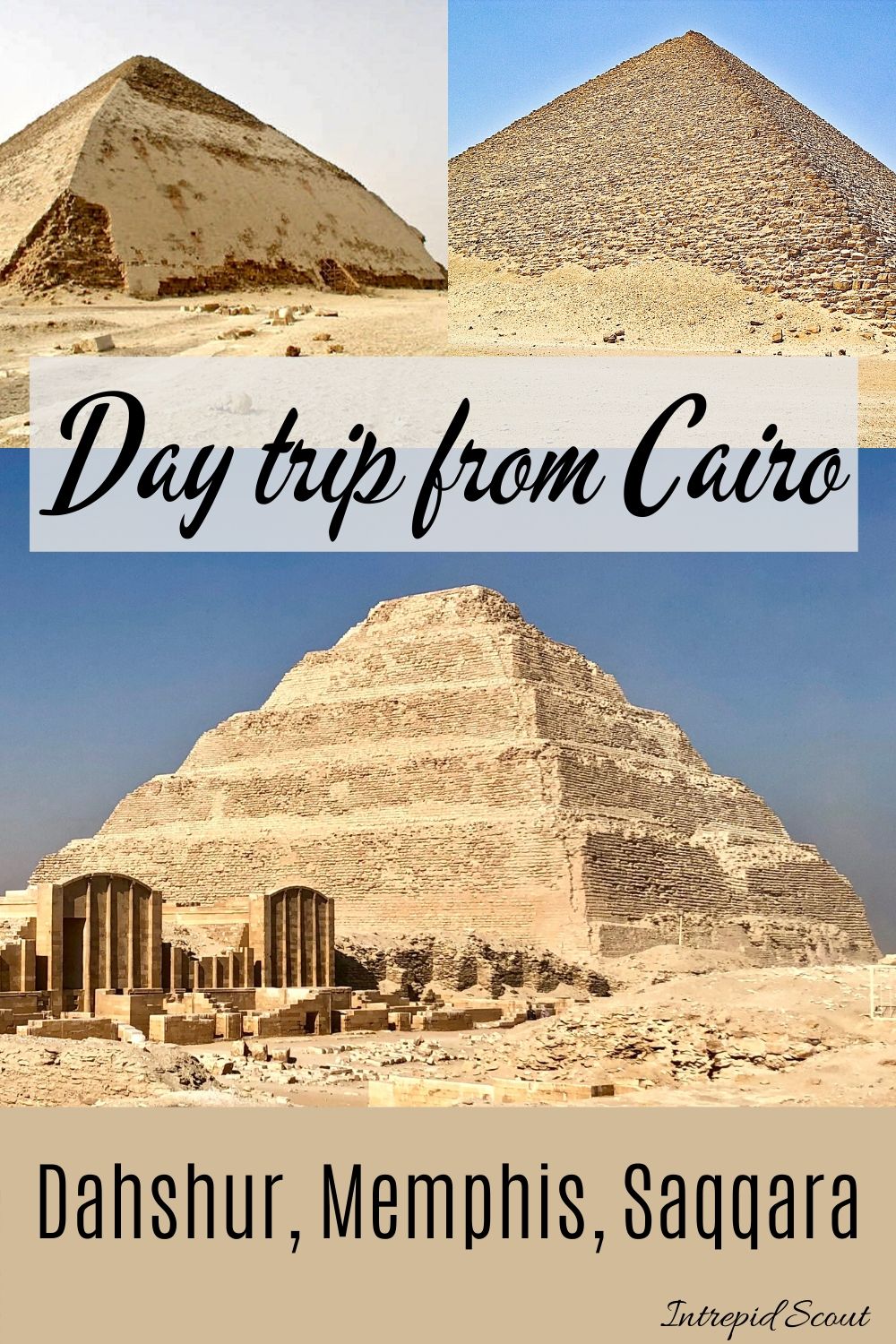 The day trip from Cairo continues and after visiting Dahshur, it is time to head to Memphis.

It will take you no more than 20 minutes to reach Memphis traveling by car from Dahshur.

Memphis is the English name for the present-day site of one of the great ancient capital cities of Egypt. It is believed that the city of Memphis was founded at the time of the unification of Upper and Lower Egypt around 3100 BC by the Pharaoh Narmer, who was the first pharaoh of the first dynasty.

The location of Memphis was very strategic. It sat at the entrance to the Nile River Valley near the Giza plateau. It is believed that it was Egypt’s nucleus of commerce and trade distributing food and merchandise throughout the kingdom.

In addition, Memphis served as an important religious center and a worship place of god Ptah.

Today, what is left of the ancient city is collected and displayed at the Memphis Open Air Museum.

READ: What to See in Memphis, Egypt – Your Guide to Visiting Memphis

You certainly will not miss the giant alabaster sphinx. It dates back to the New Kingdom and it is still standing at the original spot guarding the entrance to what was once the temple of god Ptah.

It is estimated that it weights more than 80 tons.

THE COLOSSAL STATUE OF RAMSES II

Now, make sure not to miss the indoor museum housing the magnificent fallen colossal limestone statue of Ramses II. I think for me, that was the highlight of the tour of Memphis.

The statue is absolutely amazing and you need to see it to appreciate the sublime details!

As my guide told me, the statue is 10 m (33 ft) tall. It was discovered by Giovanni Caviglia in 1820 near the entrance to the great temple of god Ptah.

Moreover, take your time and meander around the Open Air Museum in Memphis.

What caught my attention were very impressive statues of Ramses II. In addition, my tour guide pointed out to me the statue of the triad of Memphis which includes the great god Ptah, his wife Sekhmet, and their son Nefertum. However, I was told that the sculpture depicting Nefertum was replaced with that of Ramses II.

Also, at the Memphis Open Air Museum, I saw the statues depicting goddess Hathor. I spotted that same statue many times while touring Egypt.

Goddess Hathor was usually represented as a female figure with the ears of a cow.

WHY WAS GODDESS HATHOR IMPORTANT IN ANCIENT EGYPT?

Hathor was a major goddess in ancient Egyptian religion who played a wide variety of roles.

Once you are done visiting Memphis, it is time to continue your day trip from Cairo and start heading to Saqqara.

It takes about 20-25 minutes to get to Saqqara from Memphis traveling by car.

Saqqara, also spelled Sakkara or Saccara in English, is the vast necropolis site of the ancient capital city of Memphis. And, this is the place where the building of pyramids first began in Egypt.

There is a lot to see at the Saqqara Archaeological Site, however, I recommend that you start your tour of Saqqara at the Imhotep Museum. Also, make sure to check out my post: Saqqara – Top Tips for Visiting Saqqara in Cairo, Egypt

The Imhotep Museum is named in honor of the Egyptian architect Imhotep who is credited with designing the famous Step Pyramid of Djoser as well as the whole complex around the pyramid.

It is a great starting point for visiting the Saqqara Archaeological Site.

You will be able to see archaeological findings from various excavations in Saqqara.

THE STEP PYRAMID OF DJOSER

The Step Pyramid is 60 meters high (204 feet) and consists of six steps.

The Step Pyramid of Djoser at Saqqara was a part of a funerary complex consisting of temples, courtyards, shrines, and living quarters for the priests.

The complex was surrounded by a wall. And, interestingly, as my guide told me, the wall had 13 false doors which were cut into the wall. In addition, there was a trench surrounding the wall. All of this, to protect, defer and disco

What remains today of the Step Pyramid Funerary Complex is still well preserved. Make sure to take some cool pictures of the beautiful Hypostyle Hall at the Temple of Djoser.

The tomb of Ka-gmni consists of eight decorated chambers and five storage rooms.

The decorations in the first chamber show scenes depicting fishing and fowling. However, what caught my attention were splendid depictions of birds and animals. Make sure not to miss beautiful reliefs of offerings bearers. You can find out all the details about the tomb and check out my pictures in my post: Saqqara – Top Tips for Visiting Saqqara in Cairo, Egypt. Plus, learn how the Step Pyramid of Djoser was constructed! 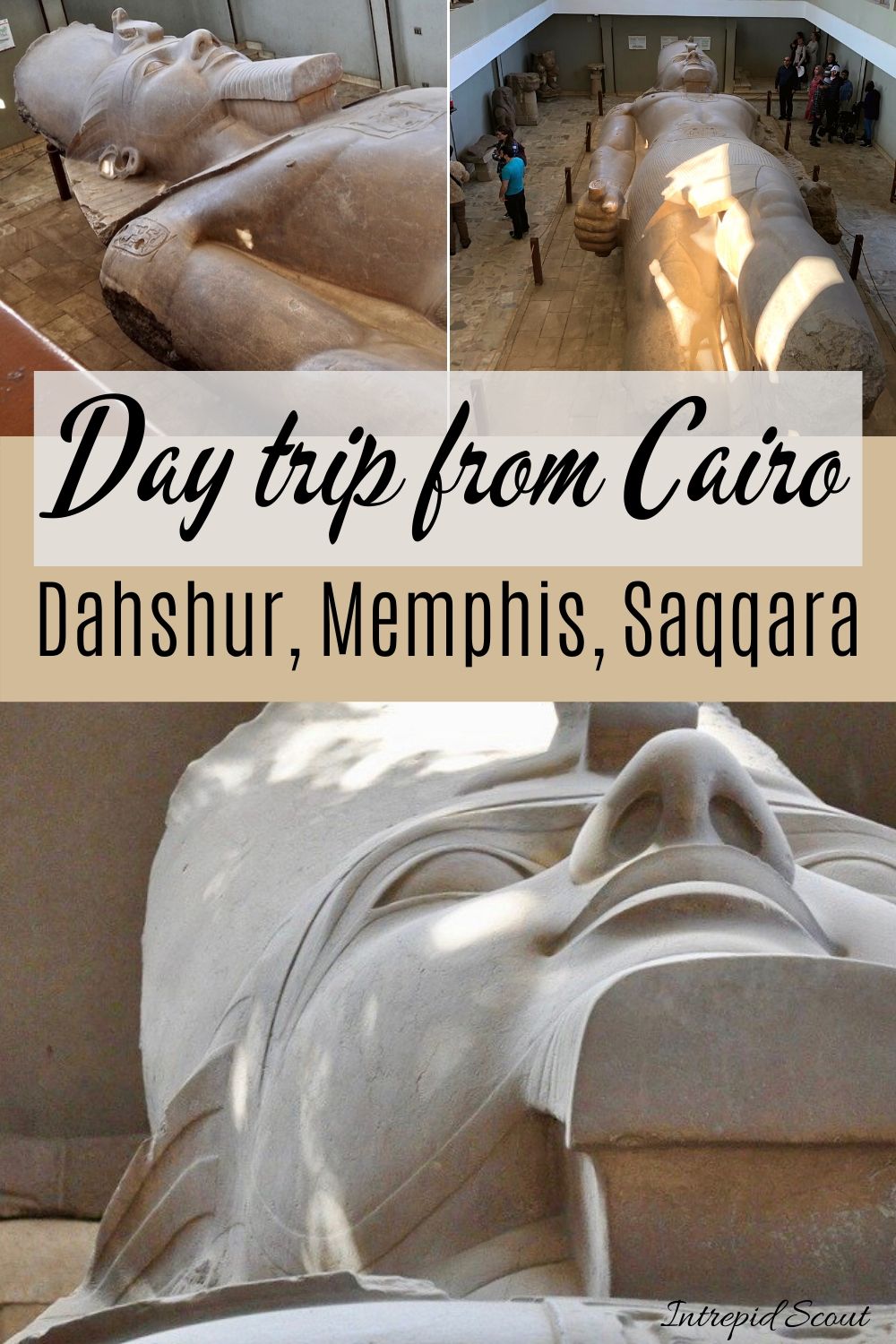 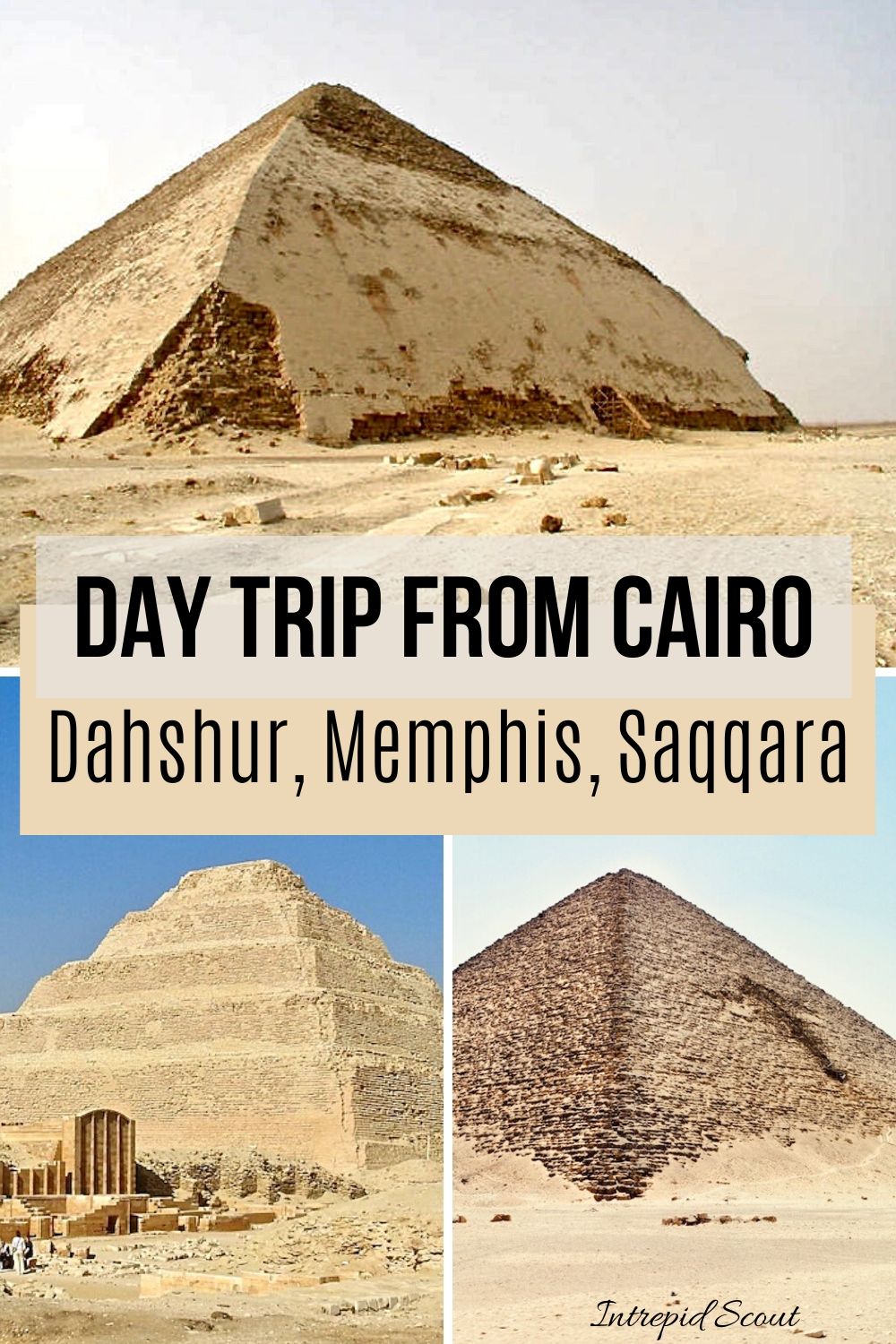 Check out my latest post about the amazing Khan el-Khalili Bazaar in Cairo which you cannot miss if you are planning to be in Cairo!

Read more
Saqqara - Top Tips for Visiting Saqqara in Cairo, Egypt
Previous
10 Unmissable Things to Do at the Pyramids of Giza
Next