What to See in Memphis, Egypt – Your Guide to Visiting Memphis What to See in Memphis, Egypt -
Your Guide to Visiting Memphis

Memphis is the present-day site of the oldest capital city of Egypt.

In my opinion, it is a great starting point for visiting Egypt.

Here is your guide to visiting Memphis and a detailed information of what to see in Memphis.

Memphis is the English name for the present-day site of one of the great ancient capital cities of Egypt.

Today, what is left of the ancient city is collected in the Memphis Open Air Museum.

Where is Memphis Located

Memphis is located approximately 20 kilometers south of Cairo. It will take you about 45 minutes to reach Memphis traveling by car from Cairo.

Why Was Memphis Important

It is believed that the city of Memphis was founded at the time of the unification of Upper and Lower Egypt around 3100 BC by the Pharaoh Narmer, who was the first pharaoh of the first dynasty.

Who Was Pharaoh Narmer?

He was the successor to the Protodynastic king Ka.

Some consider him the unifier of Egypt and founder of the First Dynasty, and in turn the first king of a unified Egypt.

A majority of Egyptologists believe that Narmer was the same person as Menes.

The location of Memphis was very strategic. It sat at the entrance to the Nile River Valley near the Giza plateau.

It is believed that it was Egypt’s nucleus of commerce and trade distributing food and merchandise throughout the kingdom.

In addition, Memphis served as an important religious center  and a worship place of god Ptah.

In Egyptian mythology, Ptah is the demiurge of Memphis, god of craftsmen and architects. In the triad of Memphis, he is the husband of Sekhmet and the father of Nefertum. He was also regarded as the father of the sage Imhotep.

How Did the Name Memphis Came About

As my guide told me, the original name of the city was Hiku-Ptah.

Later on, it was known as Inbu-Hedj, which means white walls.

Finally, it was renamed by the Greeks to Memphis.

Why not save it to your Pinterest board for later! What To See in Memphis, Egypt

Today, what is left of Memphis is collected in the Open Air Museum.

First of all, what you will see is the result of organized excavations in 1850′ by Auguste-Edouard Mariette. Mariette was the first one to reveal the evidence of the great temple of Ptah.

Second, it is a result of major excavation conducted by Sir William Matthew Flinders Petrie from 1907 till 1912. His discoveries included the pillared hall of the temple of Ptah, the pylon of Ramses II, the great alabaster sphinx, and many others.

Once you start touring the Open Air Museum, make sure not to miss the granite statue of Ramses II.

Second, make sure to locate the granite coffins, commemorative tablets, and more statues from later periods.

Furthermore, do not miss the giant alabaster sphinx dating back to the New Kingdom and still standing at the orginal spot guarding the entrance to the temple of god Ptah.

It is estimated that it weights more than 80 tons. 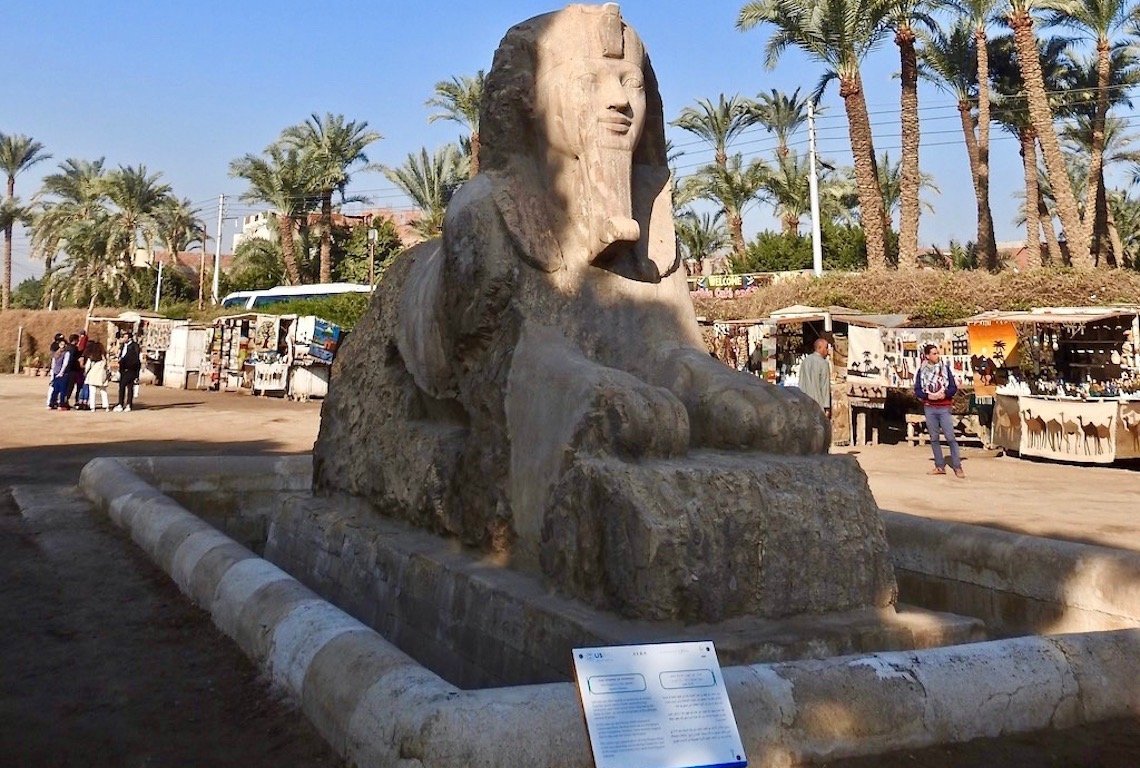 In addition, there is an indoor museum housing the magnificent fallen colossal limestone statue of Ramses II. I think for me, that was the highlight of the tour of Memphis.

The statue is absolutely amazing and you need to see it to appreciate the sublime details!

As my guide told me, the statue is 10 m (33 ft) tall. It was discovered by Giovanni Caviglia in 1820 near the entrance to the great temple of god Ptah. 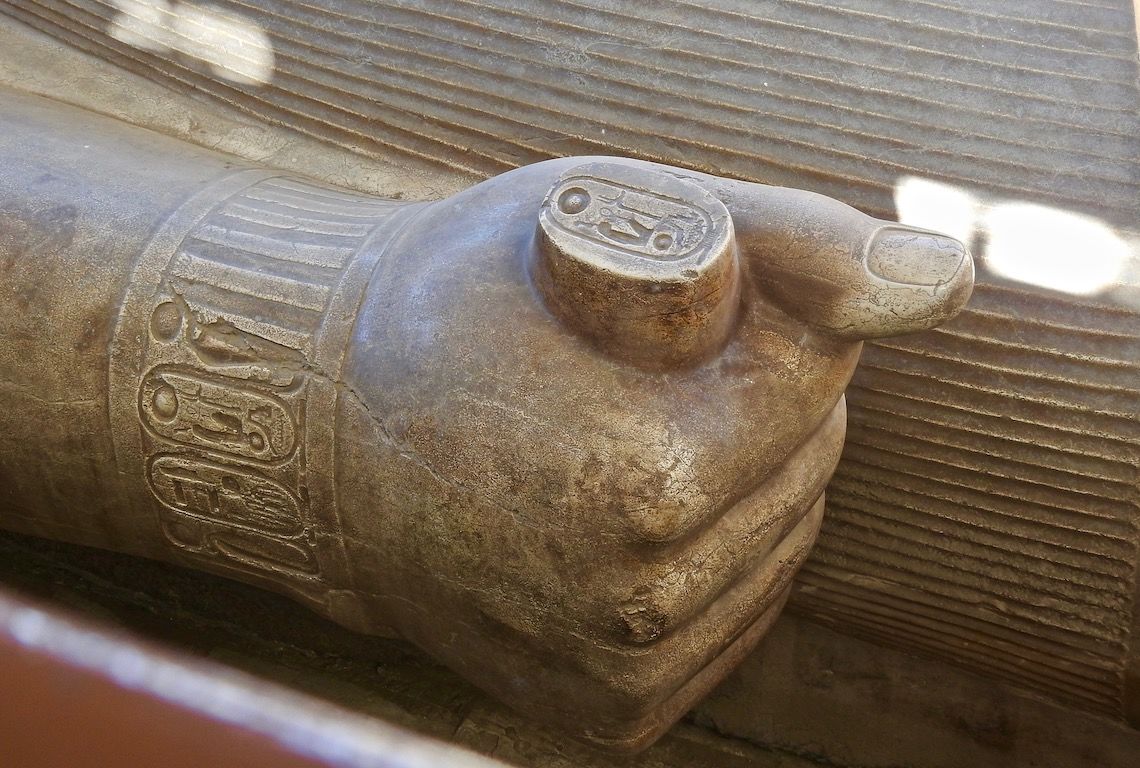 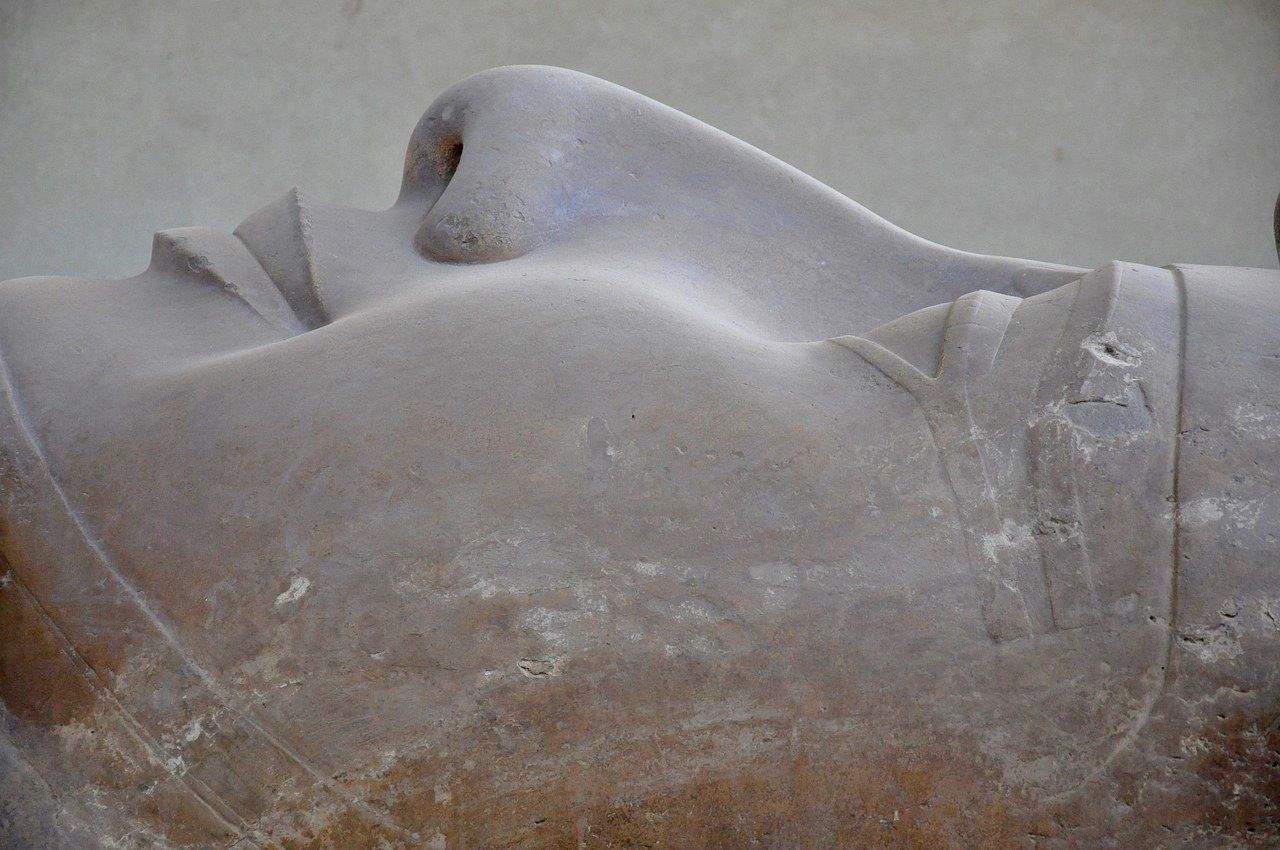 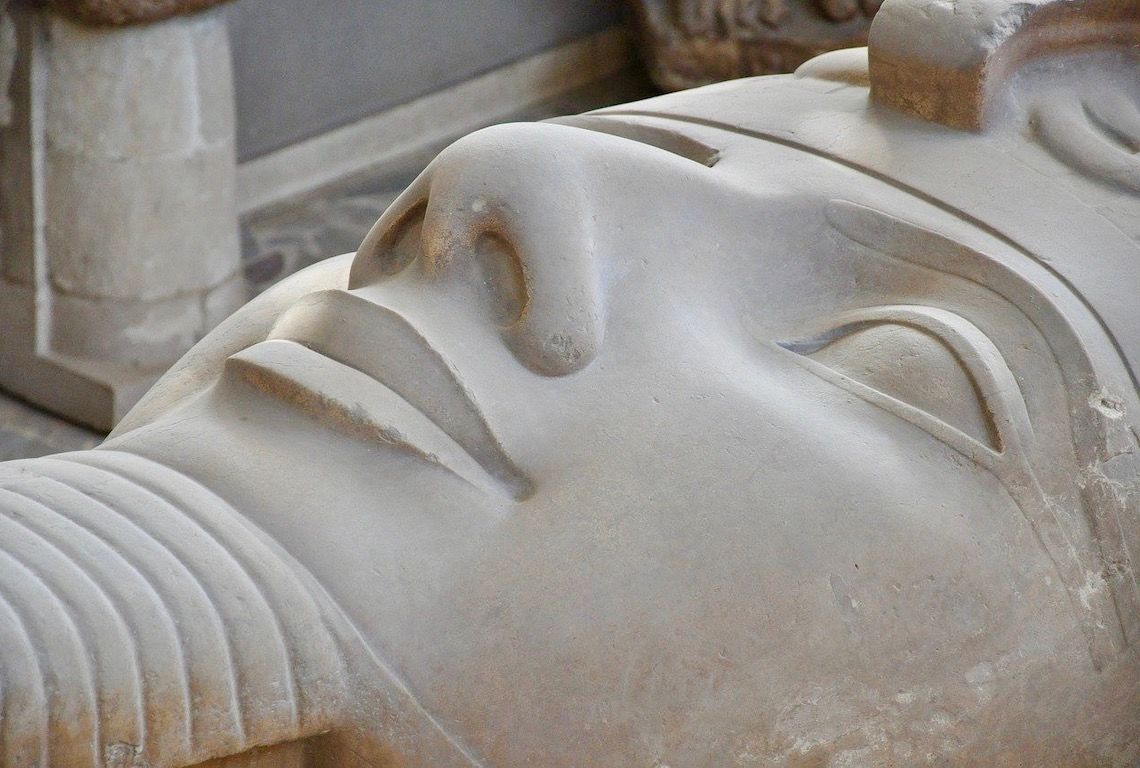 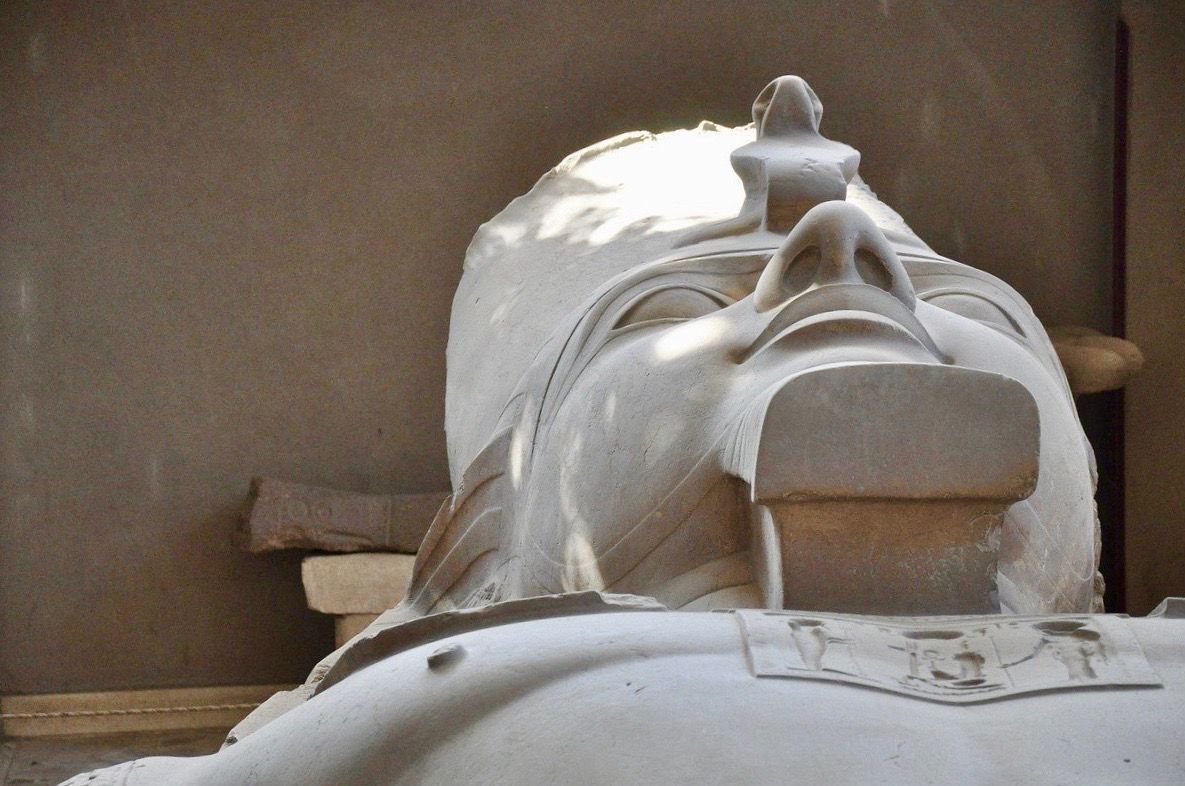 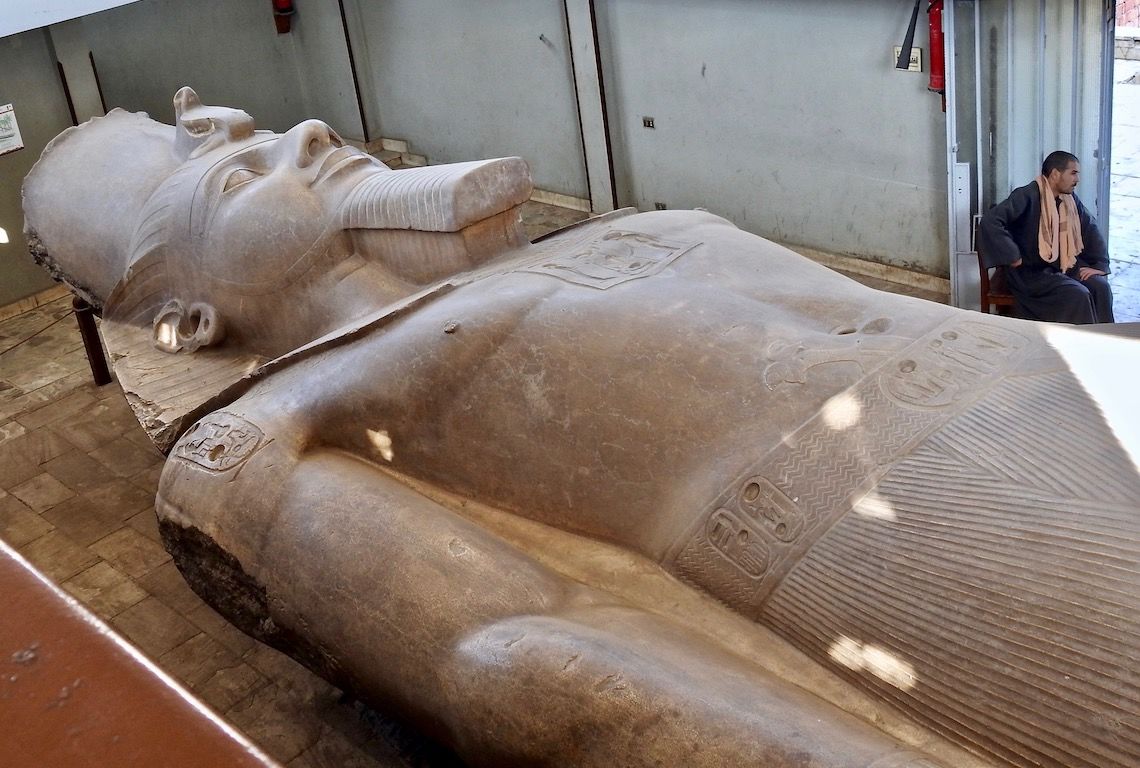 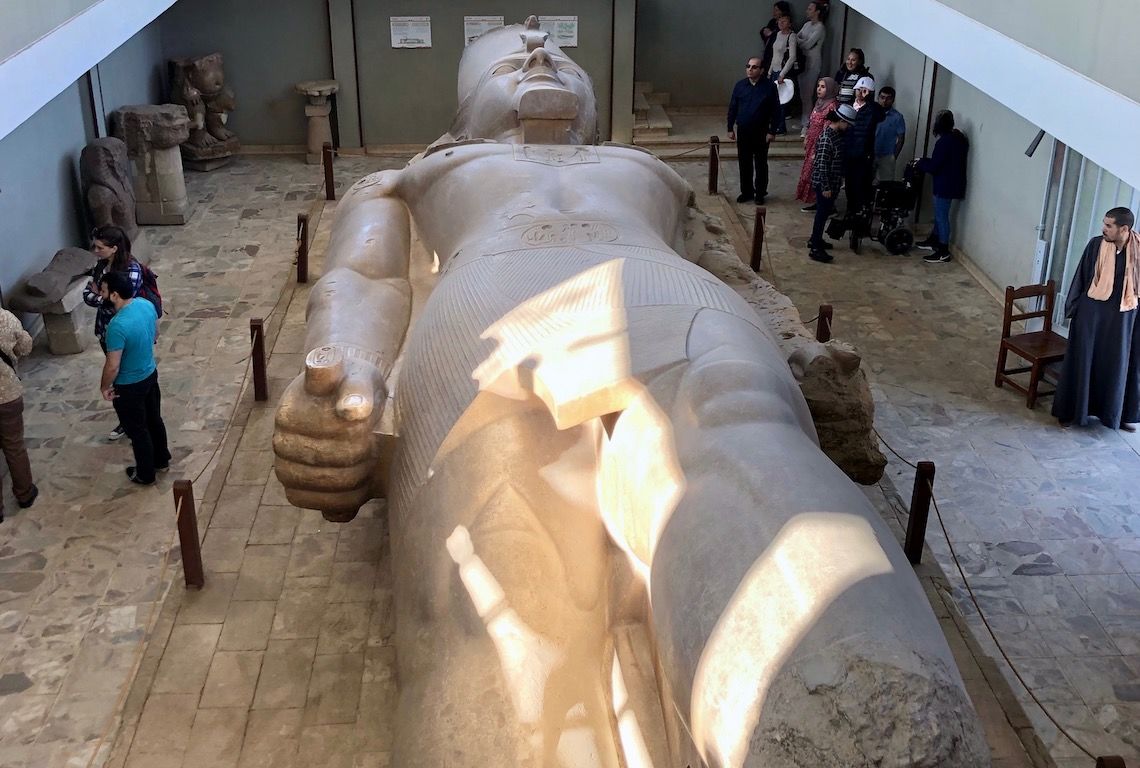 I think one person that I would like to mention again is Auguste-Edouard Mariette, not only for his discoveries of the great temple of god Ptah, but also for establishing the Egyptian Antiquities Organization (EAO) in 1859, which became responsible for the exploration as well as conservation of Egypt’s archaeological treasures and prevention of massive exportation of Egyptian artifacts abroad.

Your Guide to Visiting Memphis, Egypt

NUMBER 1 – What Are the Opening Hours of the Open Air Museum in Memphis, Egypt

The Memphis Open Air Museum is open daily from 8 am till 4 pm.

NUMBER 2 – What Is the Cost of the Entrance Tickets to the Open Air Museum in Memphis, Egypt NUMBER 3 – How to Get to Memphis, Egypt

Honestly, there is no better way of getting to the Open Air Museum in Memphis then to hire a taxi. It will take you about 45 minutes to get to Memphis from Cairo.

In addition, you should consider hiring a driver and a guide for a day or two and checking off all the attractions in and around Cairo.

Finally, your hotel would be probably more than happy to get you on an organized tour of the main attractions in Cairo.

NUMBER 4 – Do You Need a Guide to Visit the Open Air Museum in Memphis, Egypt

As you start traveling through Egypt, you will realize that there are so many different rules pertaining to visiting the sites. Some places do not allow guides inside their structures, some do. So, just stay flexible and adjust as you tour Egypt.

By the way, you do not need a guide to visit the Open Air Museum in Memphis. And, i think you will do very well on your own. I found the entire place rather well marked and signed. However, it is always a good idea to have a knowledgeable guide by your side. You will learn so much more! My guide was awesome and I found out so many details about this ancient capital city.

NUMBER 5 – Is Photography Allowed at the Open Air Museum in Memphis, Egypt

There are many places that you will visit in Egypt that have restrictions on taking pictures. Some places do not allow cameras, however cell phones are allowed. Needless to say, no matter what, always be ready and have your camera in your backpack and a cell phone as well.

At the Open Air Museum in Memphis, you are allowed to use your camera and a cell phone to take pictures. Make sure to have your camera ready to capture some spectacular closeups of the colossal statue of Ramses II.

NUMBER 5 - Is Photography Allowed at the Open Air Museum in Memphis, Egypt

Is Memphis worth visiting?

If you are wondering if it is worth going to Memphis? The answer is: yes.

However, it is not as spectacular as some other places in Egypt!

Here are a few pointers:

1. Get there early, if you are visiting during summer months. It is an open air museum and majority of the time you will be spending outdoors.

2. Make sure to have water, wear a hat, layer on some sunscreen!

3. If you only have time to see one thing, then head directly to the indoor museum to examine all the details of the colossal statue of Ramses II. In my opinion, it is simply spectacular! Is Cairo in your itinerary?