How to Visit LUXOR TEMPLE (11 Things You Can’t Miss)

The Luxor Temple is one of the most beautiful temples located on the East Bank of the River Nile in Luxor.

So, stop searching, here are my tips for 11 unique things to see at the Luxor Temple and some top tips for visiting to maximize your time and make it memorable!

The Luxor Temple – Things You Need to Know Before You Go

The Excavation of the Luxor Temple

The Luxor Temple had begun to be excavated by Professor Gaston Maspero after 1884 after he had been given the order to commence operations.The excavations were carried out sporadically until 1960.

Not only was there rubbish, but there were also barracks, stores, houses, huts, pigeon towers, which needed to be removed in order to excavate the site.

Maspero received from the Egyptian minister of public works the authorization needed to obtain funds in order to negotiate compensation for the pieces of land covered by the houses and dependencies.

11 Unmissable Things to See at the Luxor Temple

The Map of the the Luxor Temple 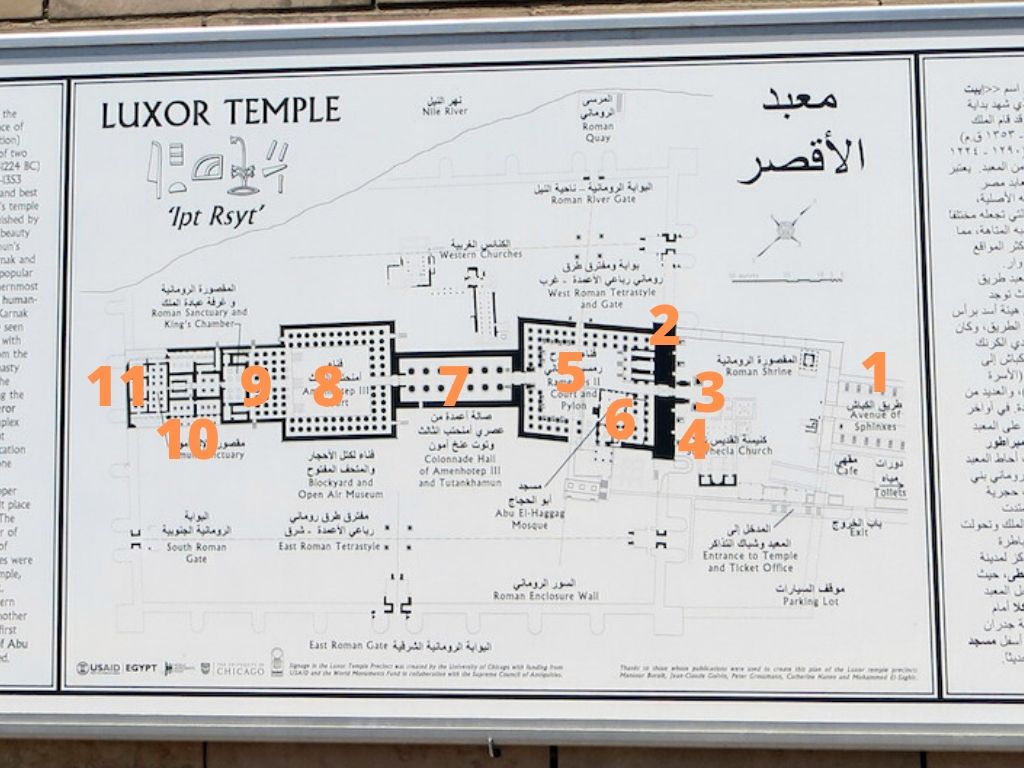 The Avenue of Sphinxes at the Luxor Temple

The front of the Luxor Temple has an impressive avenue, which once stretched all the way to the Karnak Temple. The avenue is decorated by two rows of human-headed sphinxes.

By the way, the Avenue of the Sphinxes was known as the Sacred Way. It was added by the Pharaoh Nectanebo I. 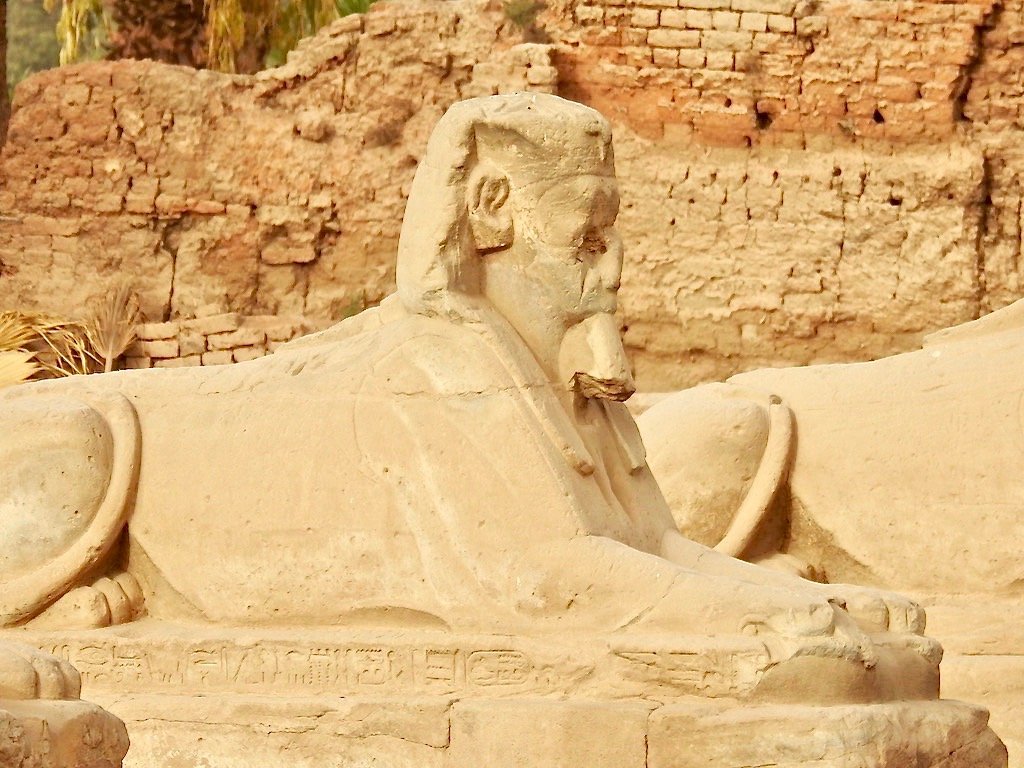 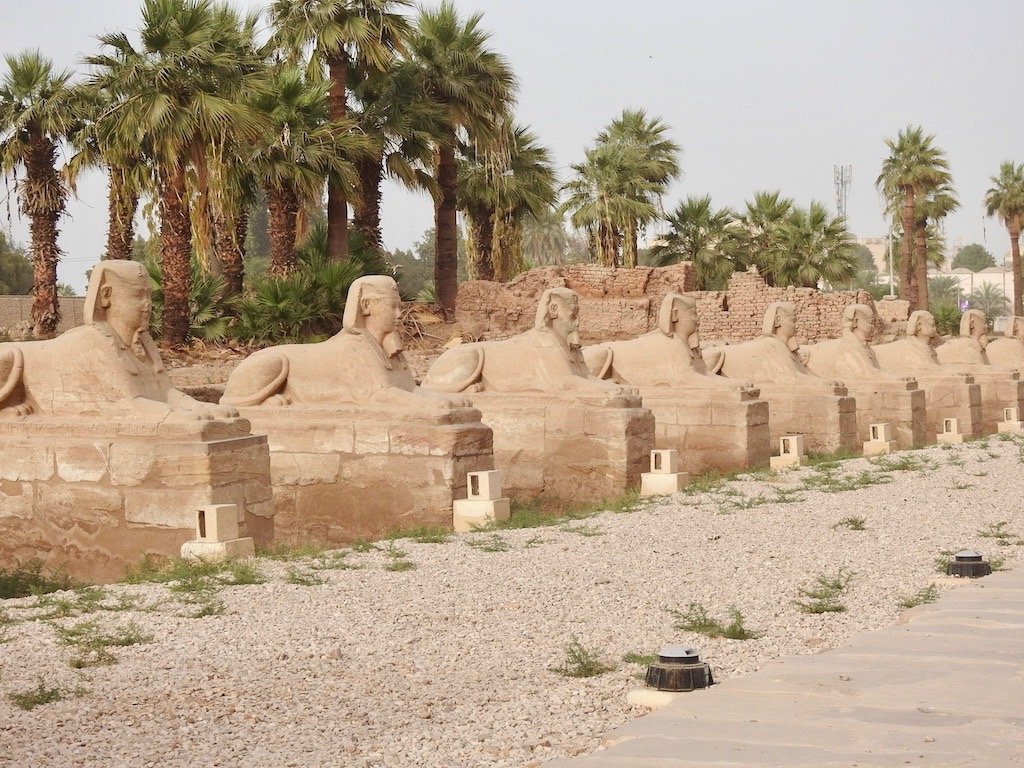 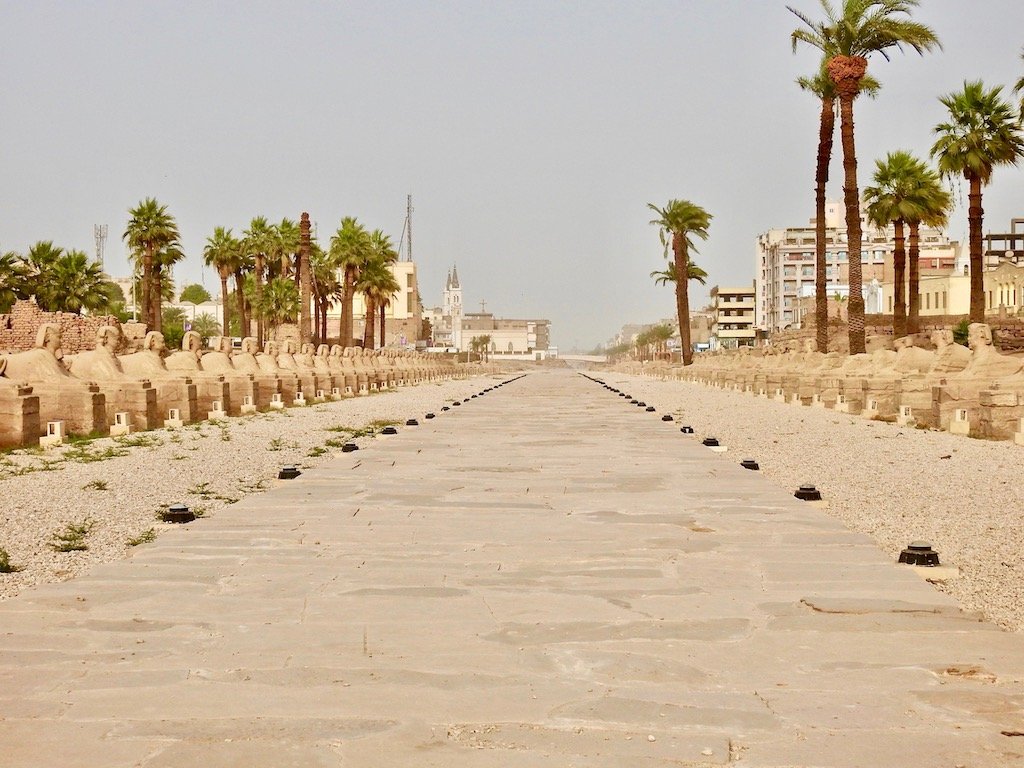 Did you know that the Avenue of the Sphinxes was used once a year during the Opet festival?

The Beautiful Feast of Opet (or Opet Festival) was an Ancient Egyptian festival celebrated annually in Thebes (Luxor), during the New Kingdom and in later periods.

The statues of the deities of the Theban Triad — Amun, Mut and their child Khonsu — were escorted in a joyous procession, though hidden from sight in a sacred barque, from the temple of Amun in Karnak, to the temple of Luxor, a journey of more than 1 mile (2 km), in a marital celebration.

The highlight of the ritual was the meeting of Amun-Re of Karnak with the Amun of Luxor.

Rebirth was a strong theme of Opet and there was usually a re-coronation ceremony of the pharaoh.

The First Pylon at the Luxor Temple

The Luxor Temple begins with the First Pylon. It is over 70 feet high.

The First Pylon was built by Ramses II and it used be decorated with (now hardly visible) scenes representing his victory at the Battle of Kadesh.

Interestingly, as my tour guide pointed out to me, you can see four openings in the First Pylon. These openings helped to support the flag masts with banners.

The Obelisk at the Entrance to the Luxor Temple

Once, there were two granite obelisks (25 meters or 75 feet high) that stood in front of the First Pylon and flanked the entrance to the Luxor Temple. Both of them were erected by the Pharaoh Ramses II.

Today, only one obelisk stands. The other one was transported to Paris. It was a gift of Muhamed Ali to King Philip Louis of France. The obelisk first arrived in Paris on 21 December 1833 and three years later, on 25 October 1836, was moved to the center of Place de la Concorde.

My guide told me that the French gifted a clock to the Egyptians. I saw it when I toured Cairo. It is situated at the Cairo Citadel. Sadly, it has never worked.

The Colossal Statues of Ramses II

This main entrance to the temple complex is flanked by six colossal statues of Ramses II. Two of them represent Pharaoh Ramses II sitting on his throne and four of them are in the standing position. 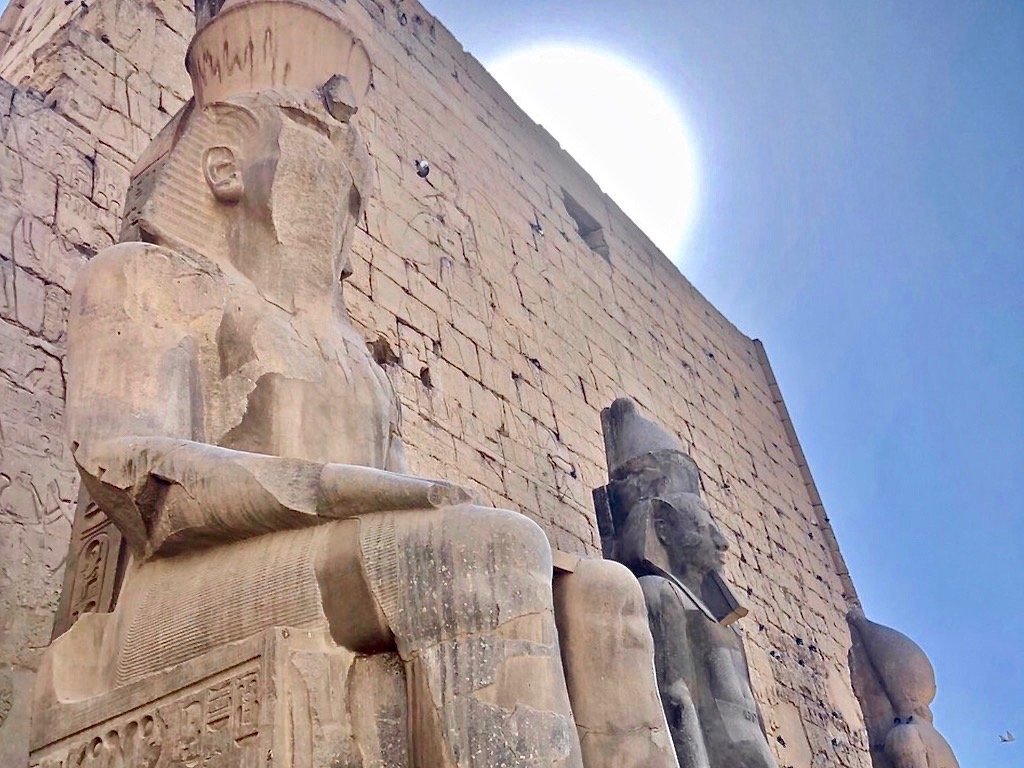 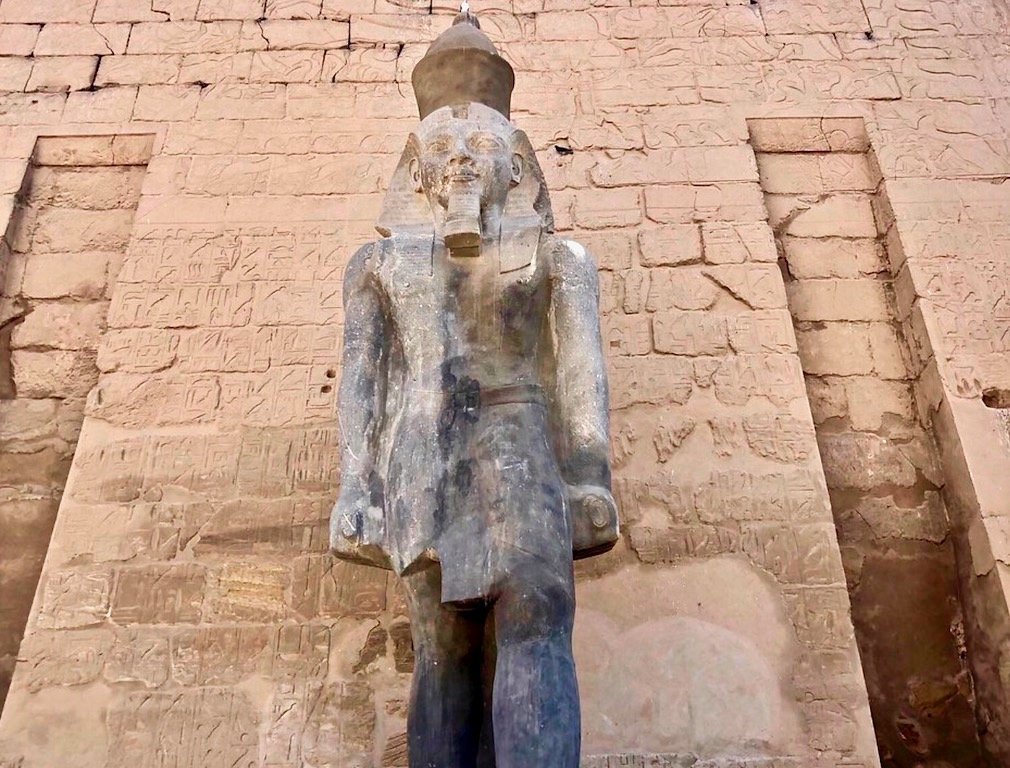 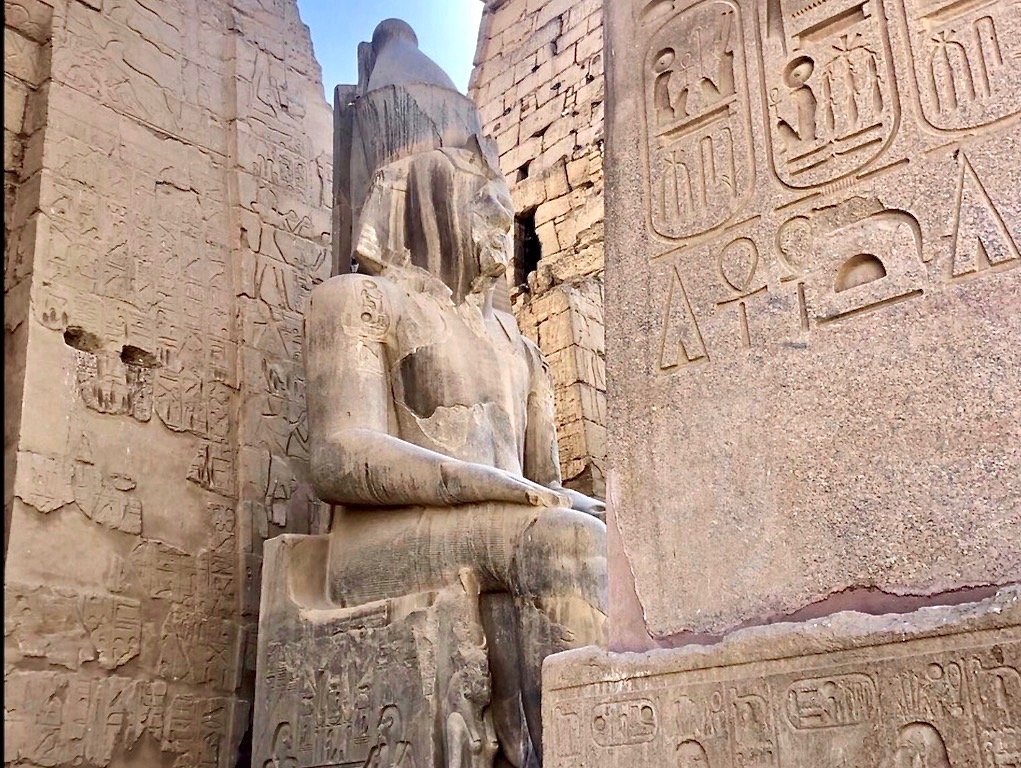 The Courtyard of Ramses II

The First Pylon leads into the magnificent Courtyard of Ramses II. Hands down, it is probably one of the most impressive things to see at the Luxor Temple.

The Courtyard is surrounded by a double row of papyrus columns with beautiful bud capitals.

In-between the columns are impressive statues of Ramses II.

Leading into the Colonnade of Amenhotep III are sitting statues of Ramses II.

The Mosque of Abu Haggag

By the time of the Arab conquest, the temple was so covered by accumulated river silt, that the Mosque of Abu Haggag was built on top of it in the 13th century.

The Processional Colonnade of Amenhotep III

After the amazing Courtyard of Ramses II comes the Processional Colonnade of Amenhotep III. It literally took my breath away to be able to step into it and admire it!

It is one of the most stunning things to see at the Luxor Temple! The long corridor lined by 14 columns with open papyrus capitals will have you stop in your tracks! It got me!

And, if you look up, you will be able to see huge beams that are supported by the columns.

Although it was built by Amenhotep III, Tutankhamen, Horemheb, Seti I, Ramses II, and Seti II all recorded their names on these magnificent columns.

The Courtyard of Amenhotep III at the Luxor Temple.

The Processional Colonnade leads into the Courtyard of Amenhotep III. It has a double row of columns with bud papyrus capitals on three sides.

The Hypostyle Hall of Amenhotep III

The southern side of the Courtyard of Amenhotep III is formed by the Hypostyle Hall. It consists of 32 columns arranged in 4 rows. I think that the Hypostyle Hall is one of the most amazing things to see at the Luxor Temple.

Moreover, there are some amazing reliefs on the walls depicting Amenhotep III making offerings to various deities.

The Hypostyle Hall opens to the Central Chamber.

It was stuccoed and painted over by the Romans in the 3rd century AD.

The paintings are still vividly visible.

Once you pass through the Central Chamber, you will reach chapels dedicated to Mut and Khonsu. And, finally, you will get to an amazing Amenhotep III’s Birth Chamber.

The Birth Chamber of Amenhotep III

Where Is Luxor Temple Located

The Luxor Temple is located on the east bank of the River Nile in Luxor.

How to Get to the Luxor Temple

With a Private Guide and a Driver

Honestly, having a driver and a tour guide is the best option of visiting the Luxor Temple. This option gives you the total flexibility. You can decide how much time you need to see everything at the Luxor Temple. Plus, having a knowledgable guide by your side is absolutely priceless!

Now, if you are staying in one of the hotels in Luxor, your hotel will be more than happy to arrange for you a driver and a guide. Needless to say, this is an expensive option, but it is all worth it.

You can ask your hotel for a bus tours that stops at all major attractions in Luxor. It is probably one of the least expensive options. But, it does not give you much flexibility.

How Much Does It Cost to See Luxor Temple

The entrance ticket to the Luxor Temple is 160 EGP.

What Are the Opening Hours of Luxor Temple

The Luxor Temple opening hours are from 6 am till 10 pm daily.

What Is the Best Time to Visit

First of all, without any doubt, plan your visit to the Luxor Temple as early as possible. If you manage to get there by at least 8 am, you will be in good shape. You will practically have the place all to yourself and be able to get some great pictures without any tourists in them. It starts to get very crowded by about 10 am.

Moreover, if your itinerary has some flexibility, then make sure to head over the Temple in the evening to catch some most spectacular images!

The Luxor Temple at Night 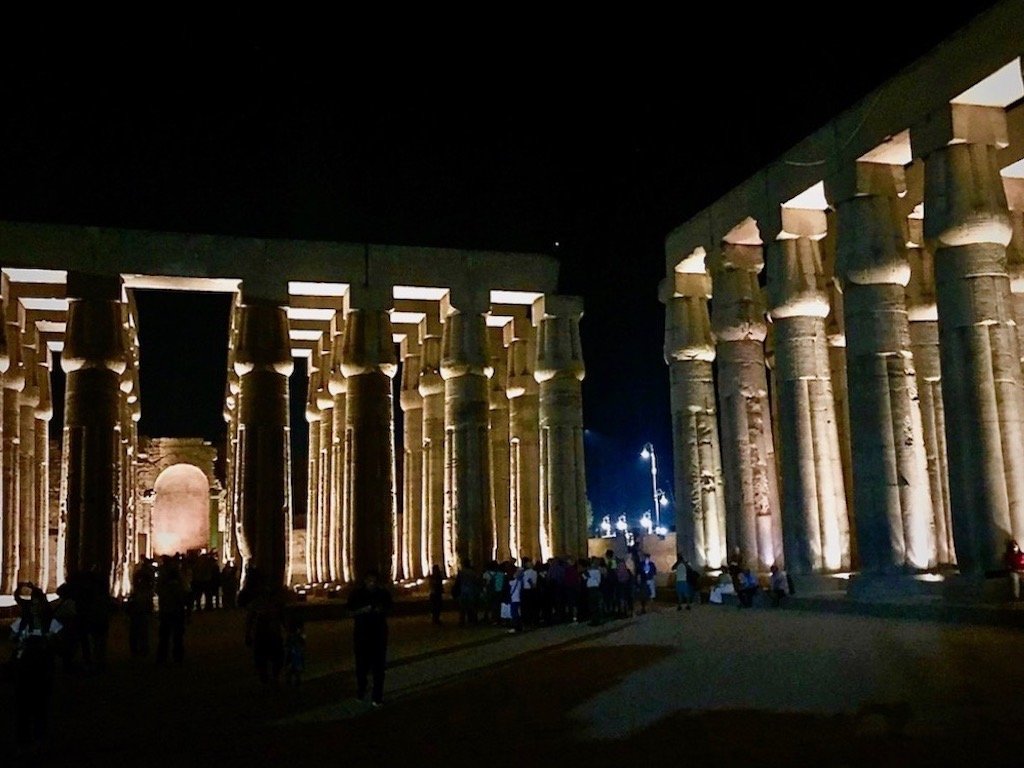 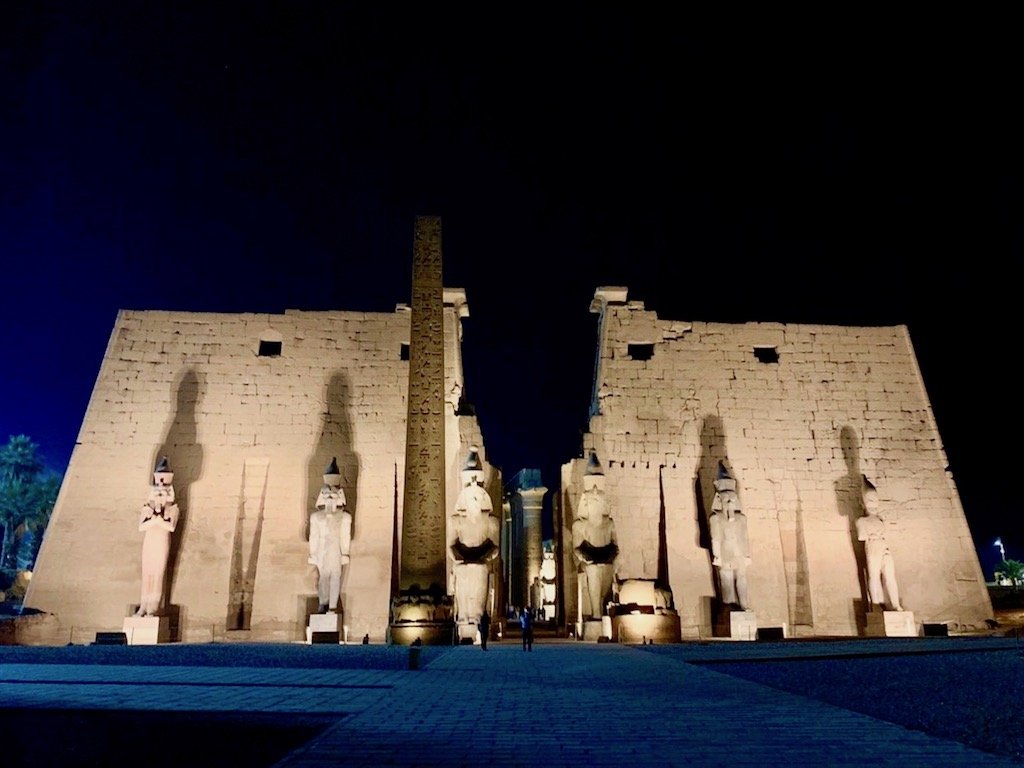 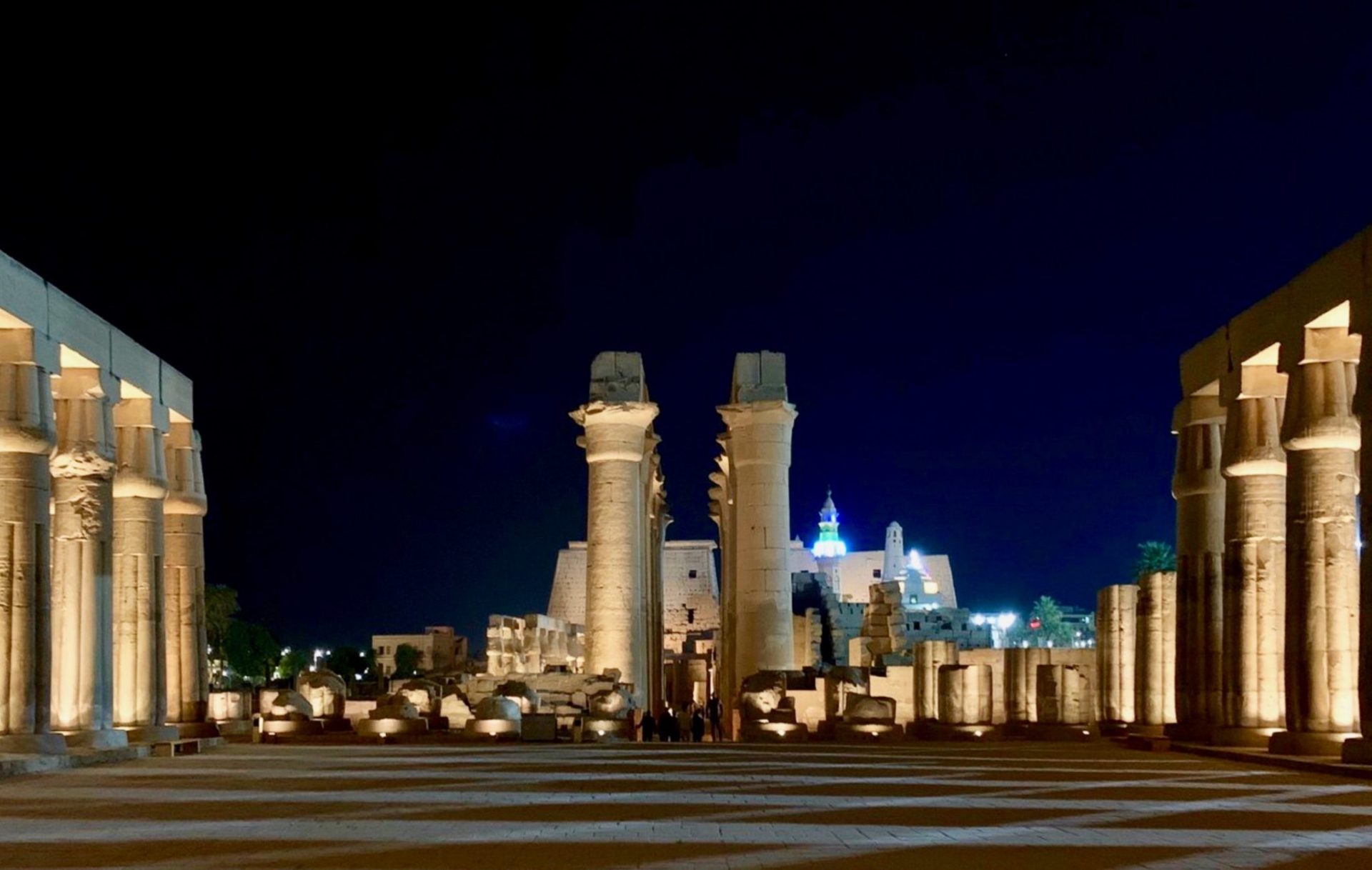 Are you planning your trip to Egypt? Is Luxor in your Egypt itinerary?

Check out my post: Perfect 2-Day Itinerary in Luxor. 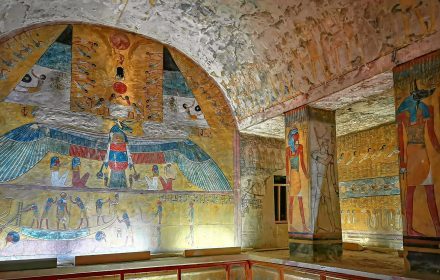 12 Practical Tips for First VISIT to VALLEY of the KINGS in Luxor, Egypt 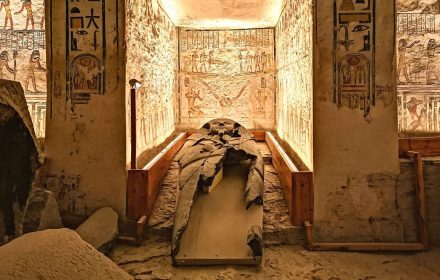 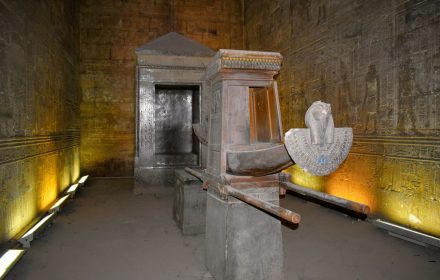 Why You Should Visit Horus Temple of Edfu in Egypt 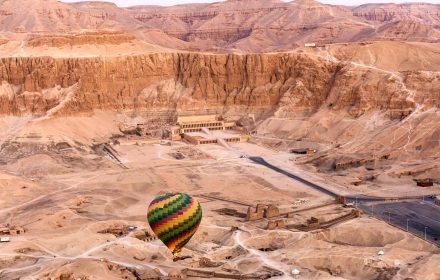