In July 1945 U.S. had successfully tested a working atomic bomb.

Robert Oppenheimer (1904-1967), an American theoretical physicist and a director of the Los Alamos Laboratory of the Manhattan Project, chose to name the atomic bomb test as “Trinity” test. 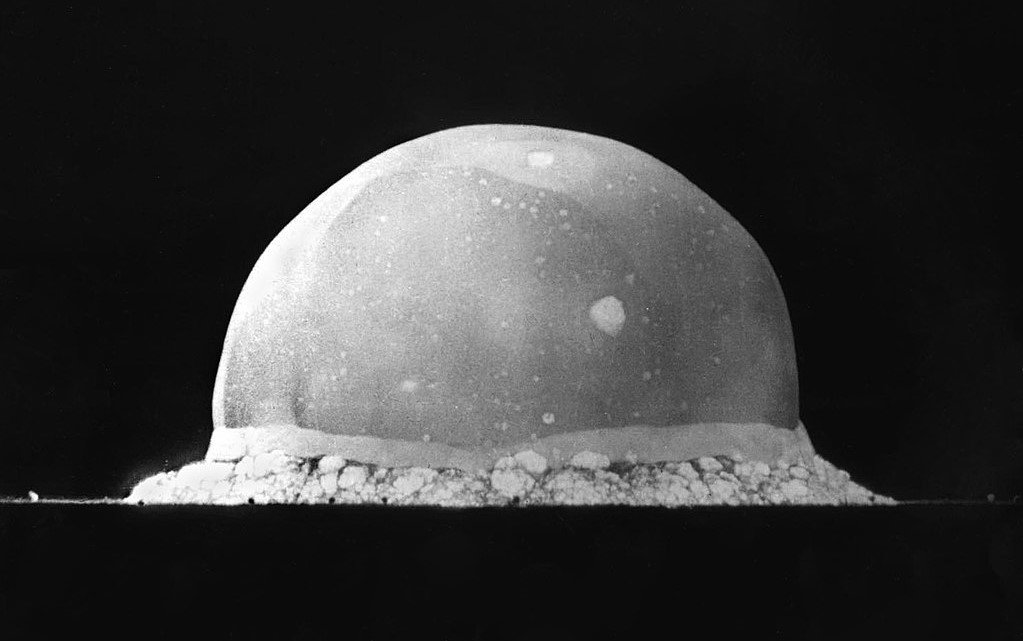 When Germany surrendered to the Allies in May 1945, it became clear that the atomic bomb might be used on Japan. Japan continued to refuse surrendering to the Allies and publicly rejected Potsdam Declaration. 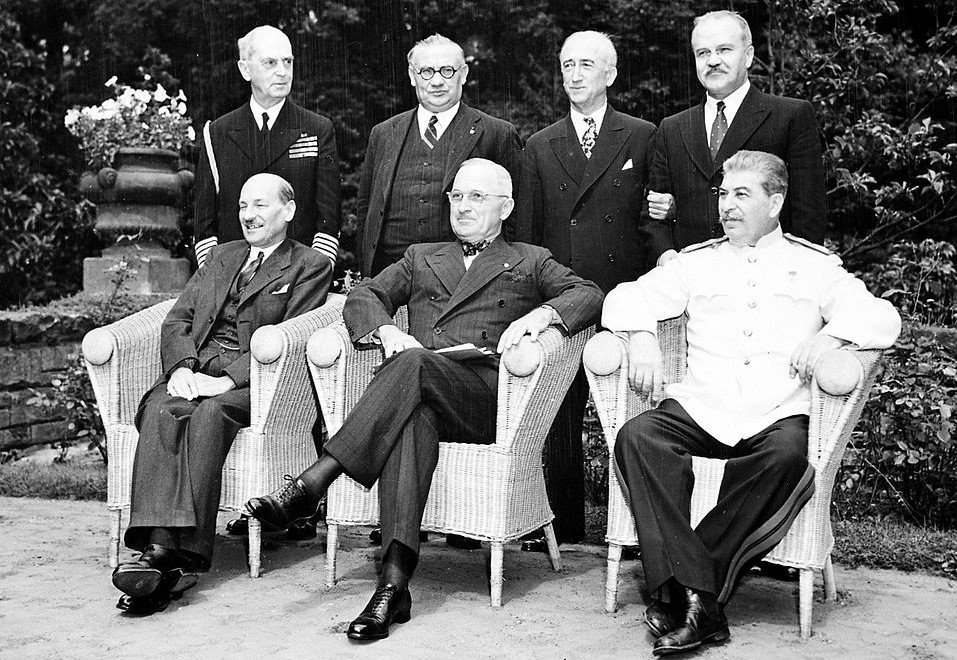 The general opinion was that the Japanese would fight to the bitter end.

The invasion of the islands by combat forces was calculated to be costly. An opinion that dropping one or more atomic bombs might convince the Japanese that further fighting was futile. And, since the atomic bomb was available, President Truman authorized the attack on Hiroshima.

Charles Maier, a professor of history at Harvard University, said that while it was possible for Truman to have made another decision, he said “It would have been hard to justify to the American public why he prolonged the war when this weapon was available.”

Why Did the U.S. Bomb Hiroshima

Thus, Hiroshima was chosen because it had not been targeted during the U.S. Air Force’s conventional bombing raids on Japan. As a result, it would give a true indication of the effect of an impact of the atomic bomb. Also, Hiroshima was an important military base.

The atomic bomb with a codename Little Boy, was dropped by the United States Army Air Forces from the Boeing B-29 Bomber Superfortress Enola Gay. It was named for Enola Gay Tibbets, the mother of the pilot, Colonel Paul W. Tibbets, Jr. 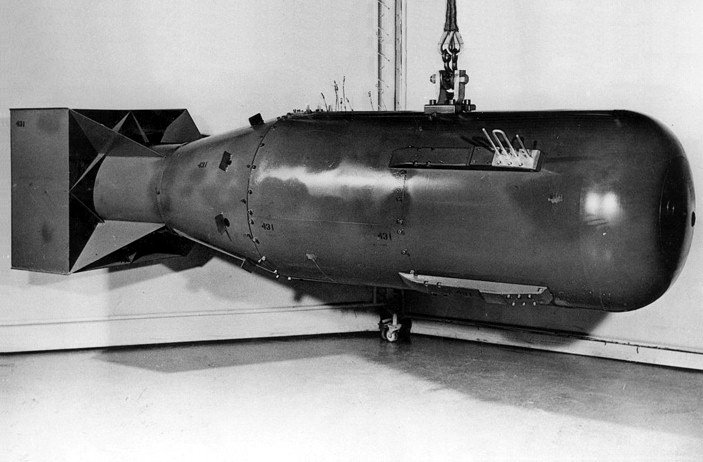 The bomb was dropped by parachute. The detonation was cased by firing one piece of uranium 235 into another and occurred at 580 m (1,900 ft) above the ground after falling for 45 seconds. The intended target for the bombing was Aioibashi bridge, a distinctive t-shaped structure which was easily recognizable from air – just to the north of where the park stands now.

The damage came from three main effects: blast, fire and radiation. The blast was the result of x-ray heated air, which sent a shock wave in all directions. Next, the fireball of the blinding light and heat created fires which merged into a firestorm.

Lastly, the radiation: soon after the explosion, a giant mushroom cloud rose upward carrying dust, dirt, ash and other debris contaminated with radioactive fission products high into the air. It mixed with the water vapor in the air and then fell back to earth in what came to be called “black rain.”

The entire city was virtually obliterated. 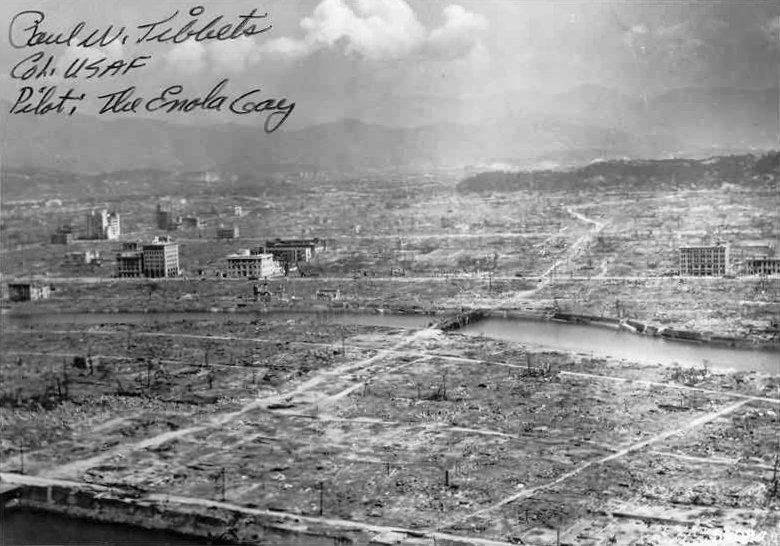 It is estimated that over 70,000 people were killed instantly and more than 70,000 suffered fatal injuries. Many more who managed to survive sustained permanent physical and psychological damage. Many still endure the effects today.

On the morning of August 9th, 1945, the Americans dropped a second, bigger atomic bomb. The original target was Kokura, however Kokura  was shielded by thick clouds on that day, so the bomb was dropped on Nagasaki. The final death toll was calculated at least 50,000.

On August 10, 1945 Japan offered to surrender to the Allies.

Today, Hiroshima has recovered into a bustling manufacturing hub with a population of 1.1 million people and counting. 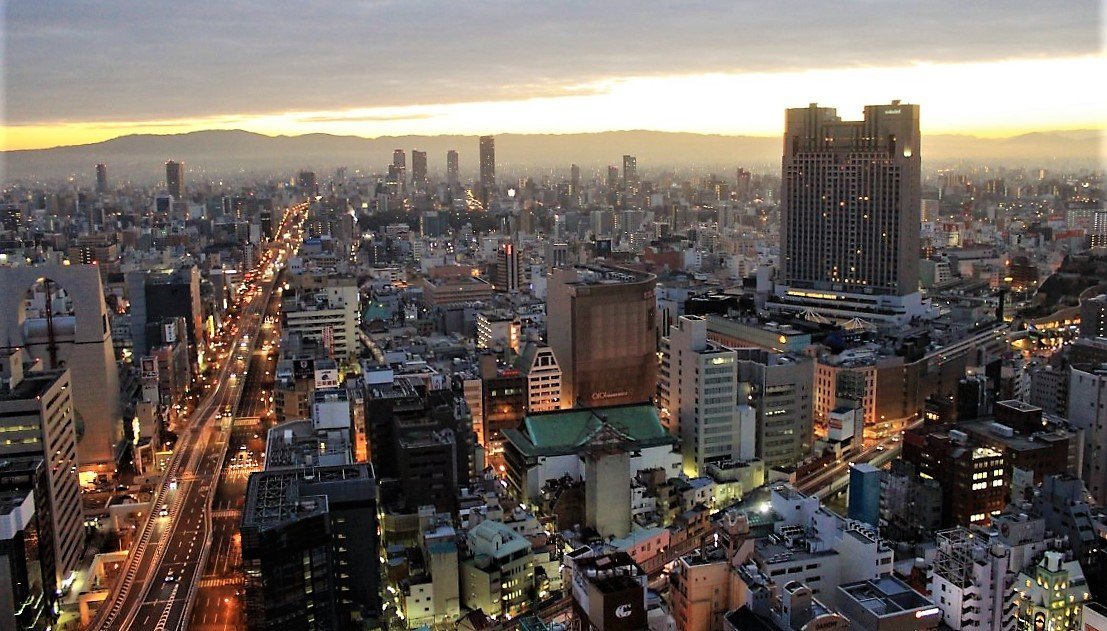 However, the people of Hiroshima have certainly not forgotten the fact that their city was once transformed to rubble by an atomic bomb. The A-Bomb Dome, Peace Memorial Park with its monuments and memorials, and the museum will forever tell the story of the cruel tragedy of the atomic bombing.

Every year on August 6, the day the bomb was dropped, Hiroshima holds a ceremony in Peace Memorial Park. 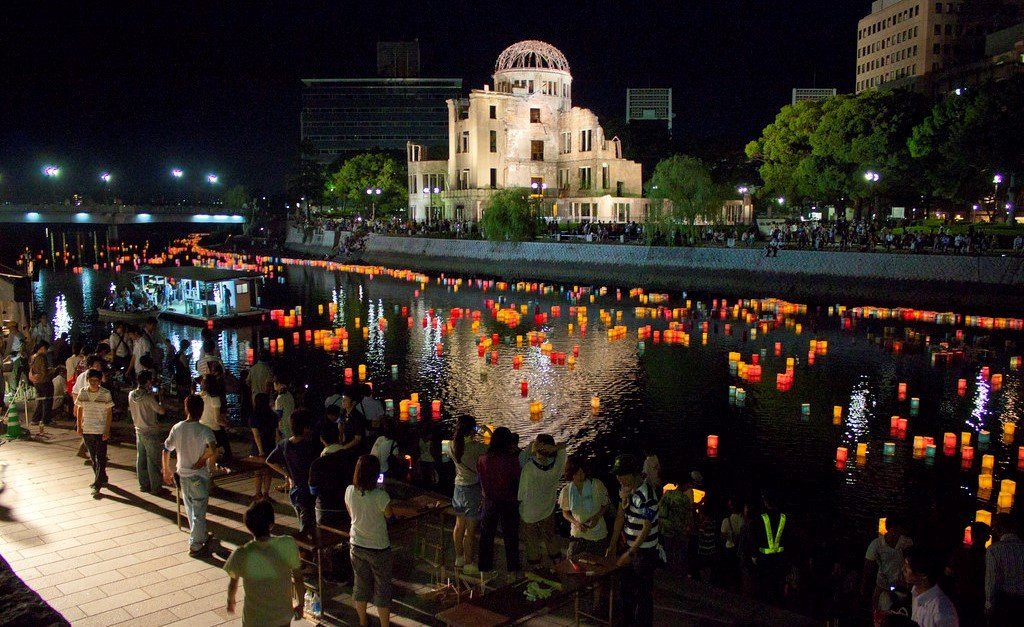 Hiroshima Peace Memorial Park serves as a memorial to the people who were killed in the atomic bombing of Hiroshima on August 6th, 1945. It was designed by Japanese architect Kenzo Tange and opened to the public in 1954.

The park has a total area of 122,00 square meters and houses a museum, numerous memorials and monuments.

While visiting Hiroshima Peace Memorial Park, I found it difficult to imagine that this quiet and spacious triangle shaped piece of land bordered by two rivers was once a busy commercial and residential downtown area.

The building was designed by Czech architect Jan Letzel and was completed in 1915. It served as the Hiroshima Prefectural Commercial Exhibition Hall and housed national and municipal governmental offices.

The building was located just 160 meters from the epicenter of the blast and amazingly, it was one of the few structures in the area to remain upright.

At night, with the lighting, the A-Bomb Dome and other memorial monuments look different than in the daytime. Darkness isolates them from the lively modern city, which makes them much more impressive to view at this hour.

Hypocenter of Hiroshima atomic bomb is marked with a memorial plaque.

The atomic bomb targeted Aioibashi Bridge, yet it exploded directly above Shima Hospital. The building was destroyed instantly, and it is estimated that 80 patients, nurses, and other individuals disappeared without a trace.

It was sobering experience for me to stand in that spot and look up into the sky.

Children’s Peace Monument is a tribute to Sadako Sasaki and all the children who perished in the atomic bombing of Hiroshima. Sadako was exposed to the A-bomb at the age of two but grew into a strong and healthy girl. Nine years later, she suddenly contracted leukemia. After an eight-month battle with the disease, she succumbed.

Hiroshima Children’s Peace Monument is also known as “Tower of a Thousand Cranes”. When you get to the monument, you will see brightly colored cranes everywhere.

These cranes came originally from the Japanese tradition of origami, or paper folding. Sadako believed that if she folded 1,000 origami cranes she would recover. She continued folding them to the last moments of her life. Today, the paper cranes are known as the symbol of peace.

Sadako’s death triggered a movement to build a monument to all the children who perished due to the atomic bomb. Children’s Peace Monument was completed on May 5th, 1958.


Cenotaph for the A-Bomb Victims

Cenotaph, also known as the Memorial Monument for Hiroshima for the A-bomb Victims is located in the center of the park. It consists of a stone coffer beneath an arch. Within the coffer is a record of the names of victims of the atomic bombing.

Cenotaph is inscribed with the phrase: “Let all the souls here rest in peace for we shall not repeat the evil.”

Hiroshima Peace Memorial Museum was built by the city of Hiroshima and it was opened to the public 1950.

Museum collects materials that convey the horror of Hiroshima’s atomic bombing. It displays artifacts, photographs, paintings that show Hiroshima before and after the bombing.

It demonstrates the present the current status of the nuclear age.

The museum has been going through an extensive renovation project since 2017. It reopened its doors on April 25th, 2019 with  two new permanent exhibitions, titled Hiroshima on August 6 and Victims and Survivors.

The exhibitions tell the story of the day the Allied forces dropped an atomic bomb on the city of Hiroshima at the close of WWII and its aftermath.

Allow at least 2 hours for your visit. Enter the museum from the first floor and take the escalator to the third floor.

Start the tour of the museum on the 3rd floor and work your way down to the ground floor.

Third Floor of the Museum

• Introductory Exhibit – see the photographs, panels, videos and panorama models of Hiroshima. See the daily lives of people in Hiroshima and learn how they were lost in the atomic bombing.

• The Dangers of Nuclear Weapons – get informed about the development, testing, and use of atomic bombs; learn about the damage caused from the shock waves, firestorms and radiation.

• Hiroshima History – learn about Hiroshima during the war, recovery efforts after the war and the struggles to eliminate nuclear weapons.

• Outline of Atomic Bomb Damage – Hiroshima Peace Memorial Museum Special Exhibition Room – this is the most poignant part of the museum. Here, you will see the victims’ belongings donated to the museum by the victims of the terrible attack or their family members.

Here, you will read the accounts of survivors which show the misery of the bomb attack.

The photographs of the effects of the bombing and the results of the subsequent radiation are heart wrenching.

Photo by Takasunrise0921 via Wikimedia Commons

for the Atomic Bomb Victims

This memorial is a very special place. It was opened by the Japanese government in 2002 and is a place to mourn the victims of the atomic bombing.

It contains thousands of written and video testimonials by survivors of the bombings and photographs of those who were killed.


Aogiri Trees Exposed to the Bombing

These aogiri (Chinese parasol) trees were originally growing 1.3 kilometers from the epicenter of the explosion and took the full force of the heat and blast.

Interestingly enough, although apparently dead, the next spring after the bombing, they started to bud again, giving hope to the people of the city.

The trees were transplanted to their current location in the Hiroshima Peace Memorial Park by the east building of the Peace Memorial Museum in 1973.

I hope the visit to Hiroshima Peace Memorial Park leaves you as struck as I was  by the brutal physical, mental and emotional agony felt by so many. War is hell. It does not matter who started it or who ended it. Or, if the acts were justified or not. War is hell. War effects everyone.

The park’s paths are filled with memorials, monuments, tributes. One after the next, all of them are reminders of the inhumanity of war.

But, while visiting Hiroshima Peace Memorial Park, I felt something else as well: I felt that there is hope for forgiveness and above all – hope for peace.

The best way to get a good understanding of the timeline leading to the bombing, the impact of the atomic bomb on Hiroshima, and the recovery efforts is to attend:

You will have a local guide who will give you an in-depth insight into the history of Hiroshima.


How to Get to Hiroshima Peace Memorial Park

From Hiroshima Station take Hiroshima Electric Railway (streetcar) and get off at Genbaku Dome-mae. It is about a 20 minute ride. The cost is 160 yen.

If you are planning on additional sightseeing in Hiroshima, consider Hiroshima Sightseeing Loop Bus.

Why not pin it!

Now, I would like to hear back from you! Are you planning a trip to Hiroshima or Miyajima?

Also, click on the image below to get inspired!

hiroshima japan top best things to do in hiroshima

Great photos. Thank you for the information about the museum. If I don’t have time to view the whole building, it is nice to have a guide of what I should focus on.

Great! I am glad you like it. There is so much to see and experience that you need to stay focused.
As always, thank you for your comments!

This is the first time that I’ve heard of the Hiroshima Memorial Park, but I’ve always assume that there was one. I love that you started with so much history (I’m a history teacher) and then went on to share what Hiroshima is like today. I would love to visit this memorial park one day.

Thank you, Leah. I am a history fanatic. I love it. I study all the historical events before I travel to any destination.