Nijo Castle in Kyoto – 10 Surprising Facts You Should Know About

Nijo Castle in Kyoto -
10 Surprising Facts You Should Know About

Are you heading to Kyoto and planning to visit Nijo Castle?

Find out these 10 surprising facts about Nijo Castle in Kyoto and ace your visit to Kyoto!

Nijo Castle in Kyoto Has the Famous Nightingale Floors

The famous nightingale floors are located in Nijo Castle. They are, also, known as singing floors. As you walk through the castle’s corridors, no matter how lightly you step, a chirping sound will define your position!

The nightingale floors were designed to make chirping sounds when walked upon. The nails for the floorboards pass thorough and rub against a metal jacket or clamp, causing chirping noises. 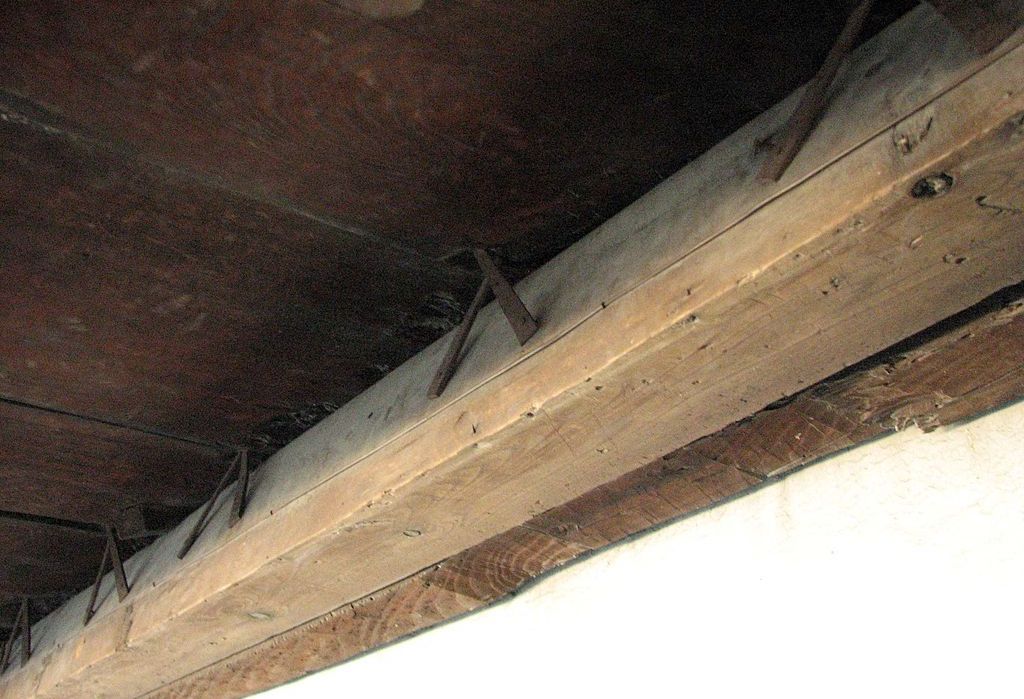 The nightingale floors were used as a security device and sounded an alarm ensuring that no one would sneak through the corridors undetected.

However, ninjas were specifically trained to walk on these singing floors.

Did you know that ninjas always walk on their tiptoes?

They first place their pinkie toe, then the fourth toe, then third, then second, and finally the big toe on the ground. They keep their knees almost fully bent and the tips of their fingers on the ground to help them keep the balance.

They know how to identify creaky areas and always stick close to the walls which tend to be strongest and therefore the least squeaky.

“A ninja (忍者, Japanese pronunciation: [ɲiꜜɲdʑa]) or shinobi (忍び, [ɕinobi]) was a covert agent or mercenary in feudal Japan. The functions of a ninja included espionage, deception, and surprise attacks.[1]

Their covert methods of waging irregular warfare were deemed dishonorable and beneath the honor of the samurai.[2]

Though shinobi proper, as specially trained spies and mercenaries, appeared in the 15th century during the Sengoku period (15th–17th centuries),[3]antecedents may have existed as early as the 12th century.” Source: Wikipedia

Nijo Castle in Kyoto Was the Residence of Powerful Tokugawa Ieyasy 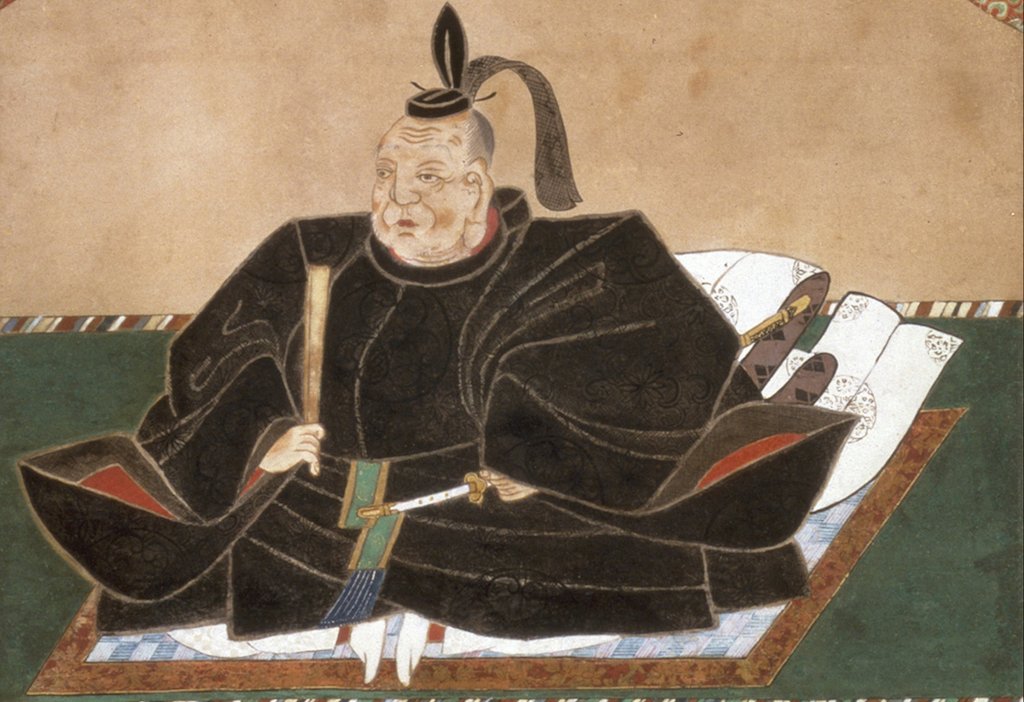 Traditionally attributed to Kano Tan’yu. Owned by the 7th Owari Tokugawa Muneharu. Portrait of Tokugawa Ieyasu as a Shintō Deity Tōshō-daigongen. Tokugawa is in his old age.

Notably, it took 23 years to complete Nijo Castle. It was finally done during the reign of the third shogun, Iemitsu, in 1626.

Tokugawa Ieyasy became the most powerful man in Japan after the death of Hideyoshi in 1598. He did not respect Hideyoshi’s appointed successor Hideyori and defeated him in the battle of Sekigahara in 1600.

In 1603, Tokugawa was appointed shogun by the Emperor and established his government in Edo (Tokyo).

The Tokugawa shoguns continued to rule Japan for 250 years.

Tokugawa Ieyasy brought the entire country under tight control. He divided the land between daimyo – vassals who were loyal to him and required them to spend every second year in Edo, which moderated their power at home.

Nijo Castle was Tokugawa’s residence whenever he visited Kyoto. 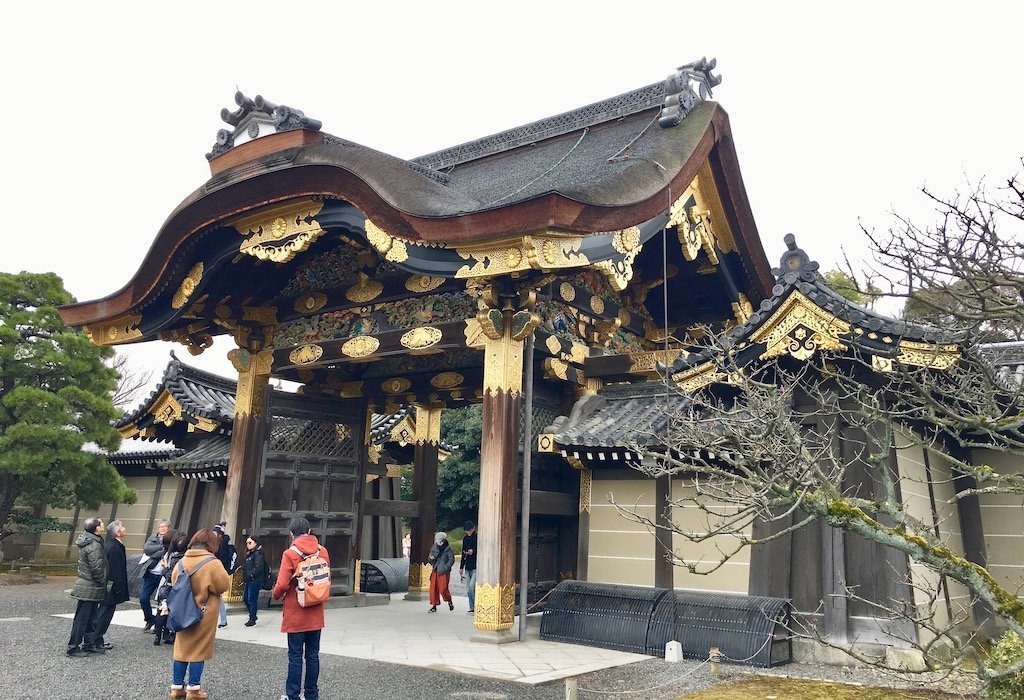 The castle’s grounds were protected by the stone walls and moats and Takugawa was guarded by an army of samurai. 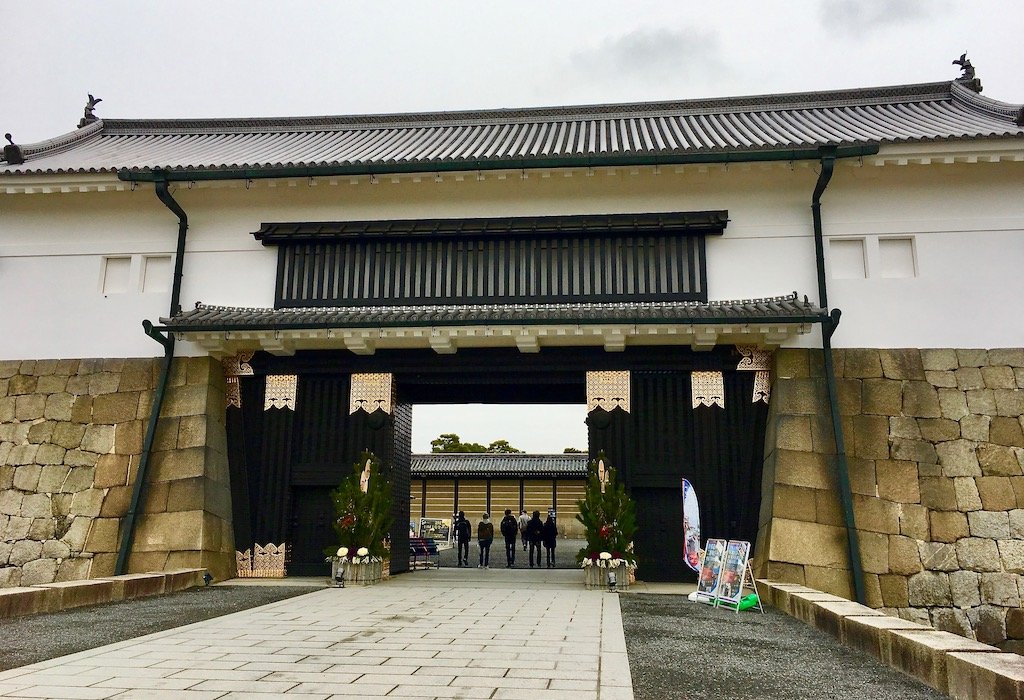 Karamon gate leading to Nijo Castle was the symbol of authority. It proclaimed the prestige of the buildings located behind the gate.

Interestingly enough, Karamon entrance was reserved only for the shogun during his visits to the castle.

The word kara can mean China as well as noble or elegant. It was often added to important objects to stress their significance.

Karamon gate at Nijo Castle in Kyoto was constructed entirely of cypress bark in hip-and-gable fashion.  The cypress bark became dark brown color as it aged. The ridges of the roof are adorned with ‘shachihoko’ – a traditional dolphin-like fish. As soon as you cross the gate, you will catch the sight of Ninomaru Palace. Its purpose was to impress the visitors, as well as, to intimidate them.

First of all, Ninomaru Palace consists of five connected buildings which were constructed with high quality Hinoki cypress. Each building was lavishly decorated with gold leaf, wood carvings and beautiful paintings created by the artists of Kano school.

Needless to say, this elaborate decor served to make the impression on the visitors and to re-confirm the power of the shoguns.

Interestingly enough, the low-ranking visitors were received in the outer regions of Ninomaru Palace, however the more prestigious visitors had access to the inside of the buildings. This division ensured their understanding of their social positions.

Secondly, the openings to the rooms for the bodyguards were clearly exposed. It ensured that the visitors were aware of the presence of shogun’s strong protection and, obviously, to intimidate the visitors.

The self-guided tour through Ninomaru Palace will take you through several of the rooms used by shoguns. It is an eye-opener on how the shoguns governed and functioned.

The tour starts with a visit to Tozamurai-no-ma (Retainer’s Room). It was used as a waiting place for daimyo who visited the castle. Here, the pictures of tigers and leopards beautify the walls. These pictures were definitely intended to intimidate the visitors.

Next, you will walk through Chokushi-no-ma Room(Imperial Messanger’s Room). Here, shogun met the messengers (envoys) from the Emperor’s court. The envoys would sit on the upper row and the shogun sat on the lower level. The purpose of this sitting arrangement was to ensure that the shogun showed respect and acknowledged the superiority of the Emperor.

I think that the most impressive is Ohiroma Ichi-no-ma (Great Hall). It is 48 tatami mats wide. It was here that the shogun met with daimyo. The tour of the place ends at Shiro-shain, which is where shogun’s living room and bedroom were located. The room has the most beautiful paintings created by Koi Kano. Interestingly, only female attendants had access to this part of the palace. 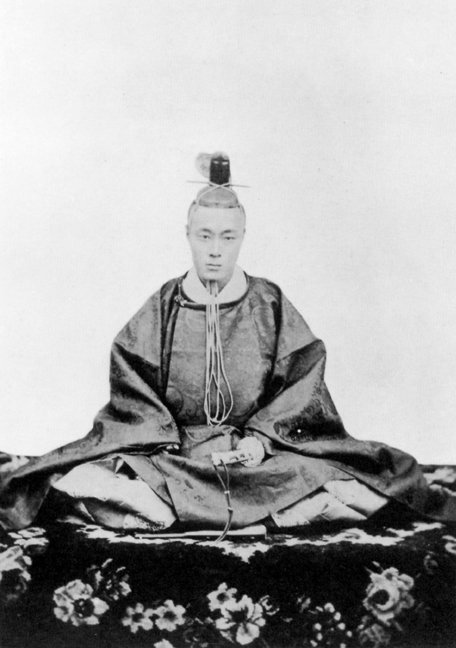 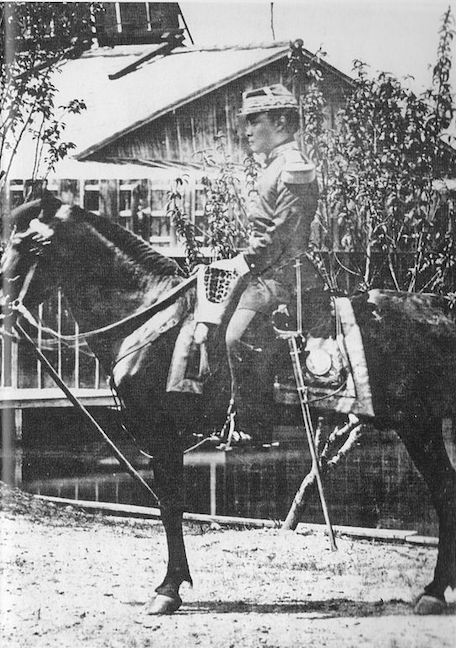 In peace time, Nijo Castle was guarded night and day by samurai known as the Nijo Zaiban.

The Nijo Zaiban samurai were dispatched to Nijo Castle by shogunate.

Two groups of fifty guards each were permanently stationed at the castle. Ban-sho (Guardhouse) served as one of their barracks.

There Are Over 2,000 Wall Paintings in Ninomaru Palace

The wallpaintings decorating the the interior walls of Ninomaru Palace were created by members of the Kano School. It was the largest school of painting in Japan for 400 years until the end of the 19th century. The Kano School painters were the official painters to the Tokugawa shoguns.

There are over 2,000 wall paintings in Ninomaru Palace. The majority of them are designated as Important Cultural Properties by the Japanese government.

To the west of Ninomaru Palace is Ninomaru Garden.

Ninomaru Garden was designed by the landscape architect and tea master Kobori Enshu. It is a classical stroll garden with a path that makes a loop around a pond. In the center of the pond is one large island representing Horai-jima (Eternal Happiness) surrounded by two smaller islands representing Tsuru-jima (Crane) and Kame-jima (Turtle). 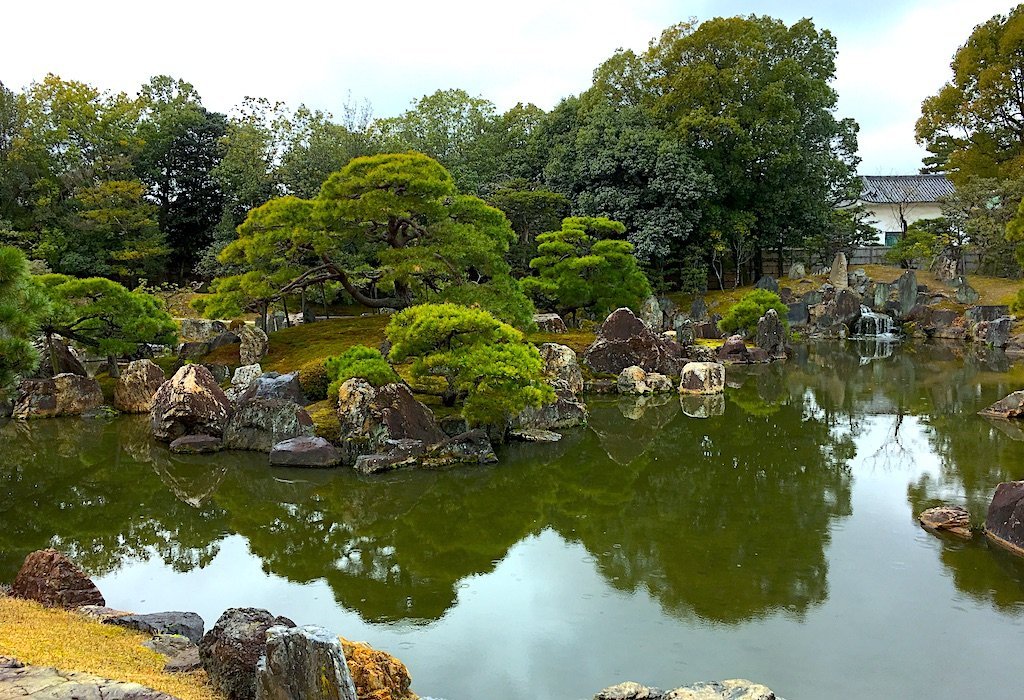 The castle’s cherry trees come into bloom from about middle of March through middle of April. The festival offers nighttime admission to the castle grounds where visitors can view illuminated cherry trees and spectacular Kara-mon Gate.

How to Get to Nijo Castle from Kyoto Station

Getting to Nijo Castle is not complicated:

From Kyoto station, take the Karasuma Subway Line to Karasuma-Oike Station. Transfer to the Tozai Line to Nijojo-mae Station. The entire trip takes about 15 min and costs 260 yen one way.

Nijo Castle is open from 8:45 am till 5 pm. However, last admission is at 4 pm. Nijo Castle is closed on Tuesdays in January, July, August and December (or following day if Tuesday is a national holiday). In addition, it is closed from December 26 through January 4th.

The entrance fee to Nijo Castle grounds is 620 yen. The combined ticket for Nijo Castle and Ninomaru Palace is 1030 yen.

Now, I want to hear back from you?

Are you planning a trip to Kyoto? Is Fushimi Inari on your list of places to visit?

Let me know! Leave me a quick comment right below!

Also, click on any images right below to get inspired and to help you plan your trip.

singing floors top best things to do in kyoto 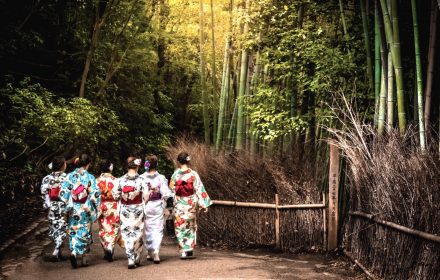 14 Unmissable THINGS to Do in ARASHIYAMA, Kyoto (Map+Useful Tips)