Nara Deer Park – Things You Need to Know Before You Go 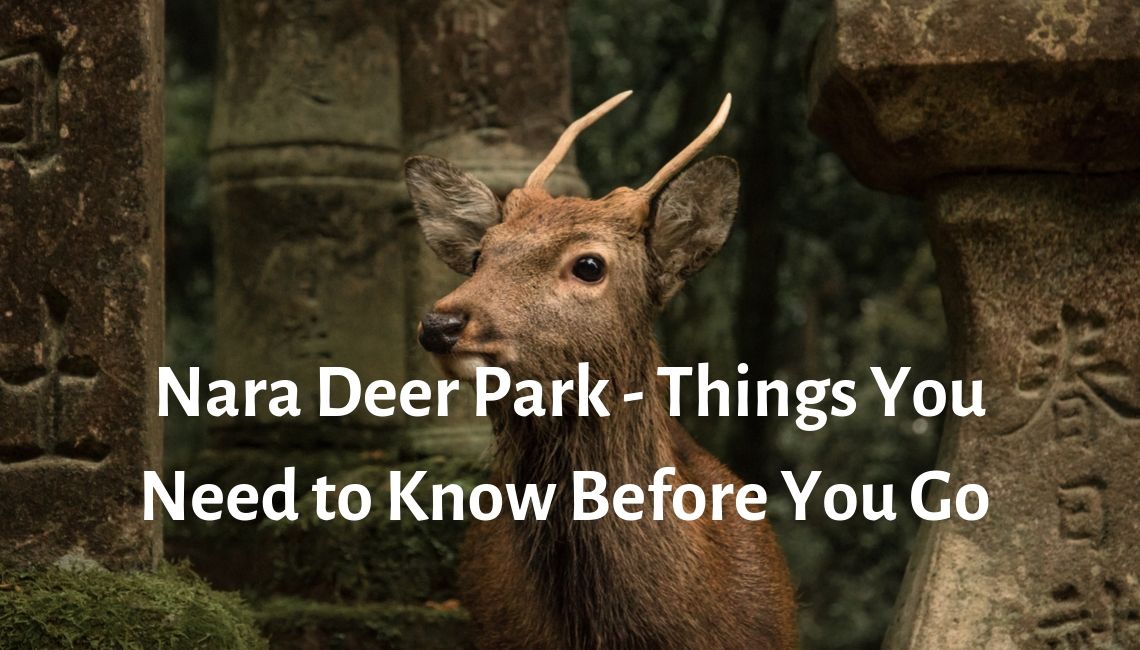 Nara is famous for its temples and shrines. But, what made my heart skip were the free roaming Nara deer. There are hundreds of them wandering through the vast lawns of the Nara Park.

Here, you will find what to need to know before you head to Nara Deer Park to make sure that you have a safe and memorable experience.

What You Need to Know about Nara Deer

The deer in Nara are called sika, which is derived from the Japanese word for deer: shika. Notwithstanding, there are over 1,300 deer in the Nara Park.

So, why does Nara have deer? And, where do they all come from?

Well, the legend has it that in 768, when the Fujiwara family established the great Kasuga Shrine in the foothills of the Wakakusa Mountain, Takemikazuchi, a Shinto deity descended from the mountain to the new sanctuary riding a sacred white deer.

Since then, the deer became a revered animal, protected by the authorities, and a symbol of the city.

Interestingly enough, until 1637, killing a deer in Nara was considered a serious crime, even punishable by the death penalty.

After WWII the divinity of deer was officially suspended, but they were declared a national treasure. Nowadays, they are protected and maintained in a semi-wild state which humans and deer use to mutual advantage.

What are Deer Crackers – ‘Shika Senbei’?

So what are deer crackers?

The answer is: deer cracker is a cracker made out of wheat flour and rice bran. These treats are made without any sugar and are safe to give to the deer. You can buy them throughout the park. They cost 100 yen per a good size package.

Notably, deer crackers are a registered trademark of the Foundation for the Protection of Deer in Nara, and a portion of their profits goes to efforts to protect the deer. 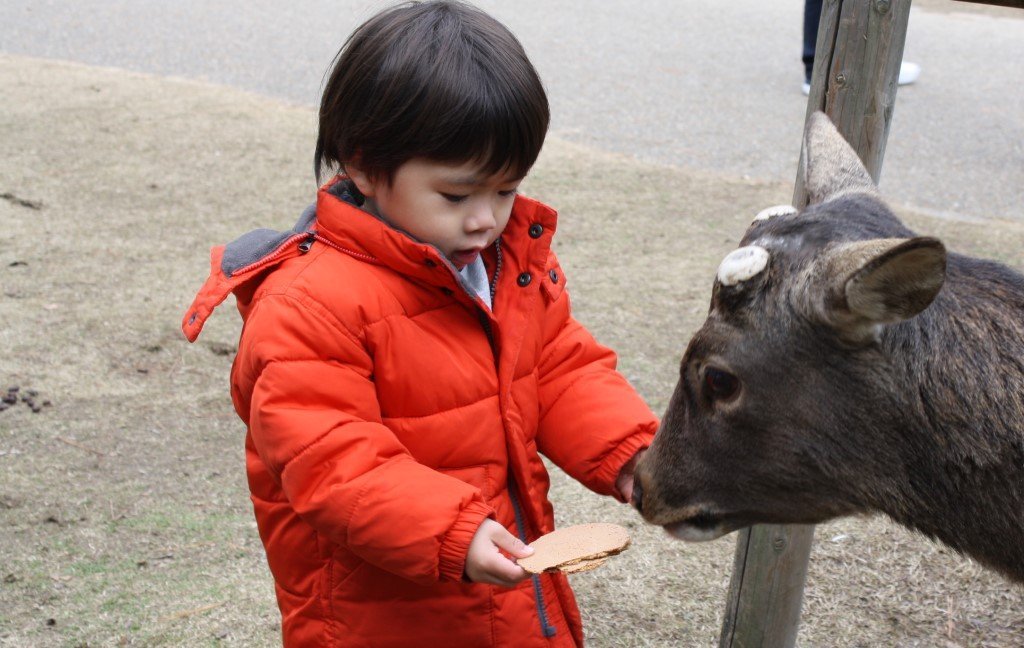 Can You Pet Nara Deer?

First of all, remember that deer in Nara are semi-wild animals.

Even though they are used to the presence of humans, they have not been domesticated and they are not pets. If you want to touch them, then extend your hand towards them, if the deer turns away or runs away, it simply means that it does not want to be touched. 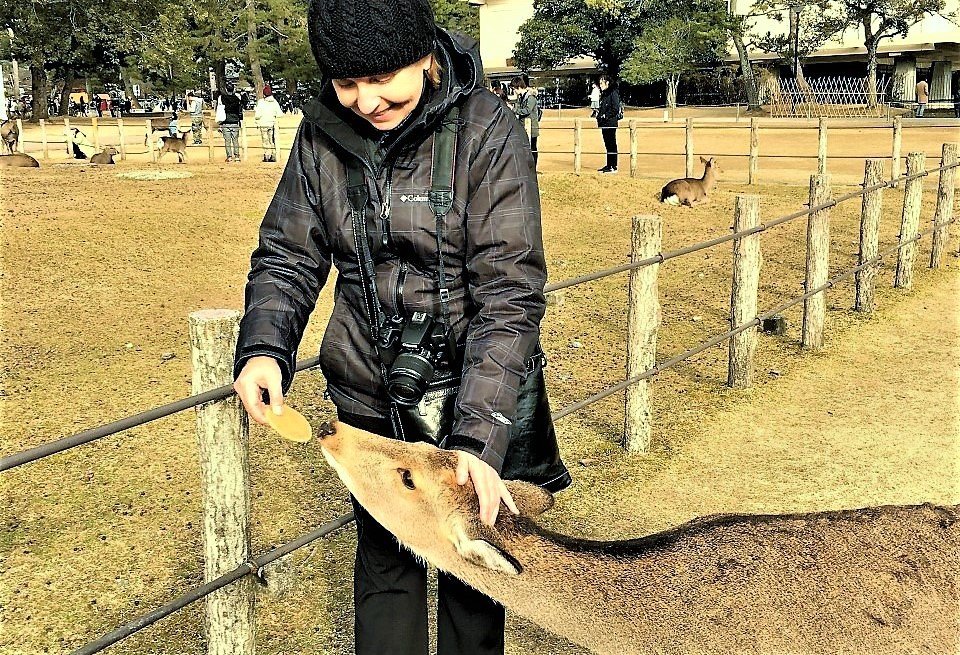 What Do Nara Deer Eat?

As stated above, Nara deer are semi-wild animals, and they are perfectly capable of finding their own food.

Throughout the year, they will typically eat several varieties of grass, including silver pampass grass.

First of all, make sure that you have all your belongings safely stowed away in your backpack or purse. Specifically, Nara deer will be interested in anything that you are carrying, that includes guide maps or flyers. Do not be surprised, if they start munching on any papers that you might have in your hands.

Next, make sure to tuck away any cell phone cables or headphone cables, you might have on you. They are curious creates and they might decide to start feasting on them. 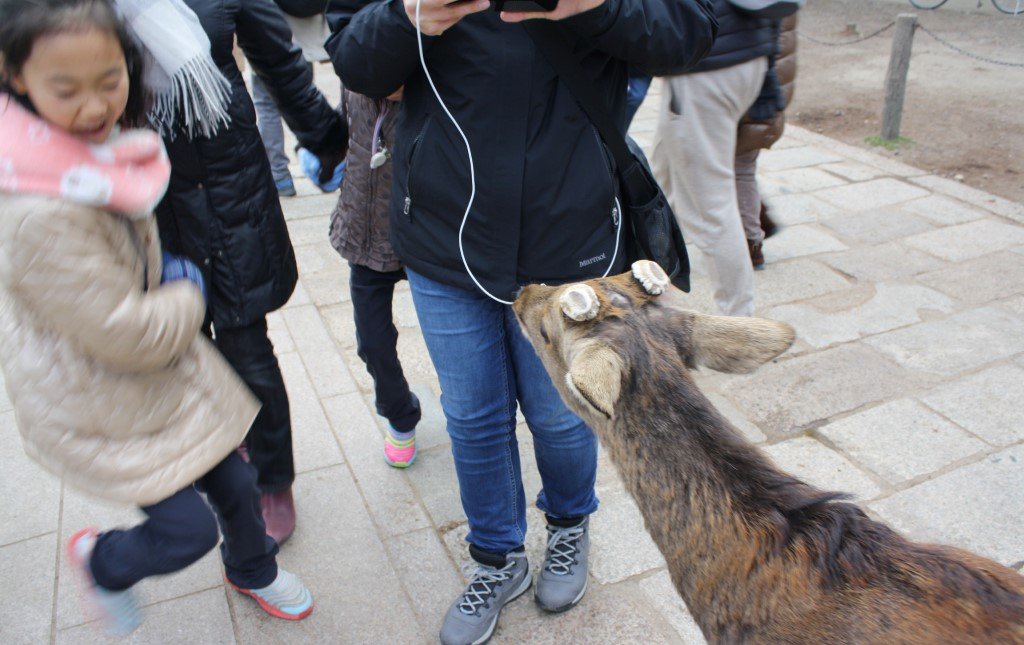 Test Your Skills at Bowing with Nara Deer

Nara Ddeer is famous for their bowing skills. If you bow to them, they will probably bow back to you and expect a cracker for it.

First of all, my recommendation is to find a mature Nara deer in hopes that it might be more used to bowing. Second, bow to it. You might have to do a couple of times, so that it gets the idea. Next, wait a bit and let the deer bow back to you. Finally, give it a cracker as a reward and a thank you.

An interesting event happening at Nara is Shikayose or deer calling.

The event is held every morning (except on Mondays) during February to mid-March at about 10 am. It happens at Tobihino, located to the south of the road leading to Kasuga Taisha Shrine.

With a sounding of the natural horn, the deer of Nara emerge from within the forest to cluster around the blower.

It is quite a sight! Kojika Koukai – Presentation of the Fawns

Every April, the pregnant does of the herd are placed within the enclosure to safely give birth to their young.

The enclosue  – Roku-en is located next to the south of the stone lantern-lined path leading to Kasuga Taisha Shrine. Every day in June from 11am – 2pm, you can visit and see the fawns at the center.

In mid-July, once the fawns are able to keep up with their mothers, the yougsters are released into the park in a special event called Kojika Koukai  – Presentation of the Fawns.

How to get to Nara Deer Park from Kyoto or Osaka

How to Get to Nara Deer Park from Kyoto

First of all, there are two train lines that connect Kyoto with Nara: the JR Nara Line and the Kintetsu Kyoto Line.

I need to mention that there is Futsu local train which is covered by JR Pass as well, however it stops by several stations on the way to Nara and the journey takes about 70 minutes.

By the way, JR Nara Station and Kintetsu Nara Station are within walking distance to each other. Both stations are about the same distance from all the attractions.

How to Get to Nara Deer Park from Osaka

To start off, there are two train lines connect Osaka with Nara: the JR Yamatoji Line, and the Kintetsu Nara Line.

In addition, if you are traveling from Osaka JR Namba Station, then take the local train of the Yamatoji Line to Kyuhoji Station and then transfer to the Yamatoji Rapid Service. This will get you to JR Nara Station in about 50 minutes as well.

How to Get to Nara Deer Park from Nara Station

Another option is to take Loop Line Bus. Specifically, take JR Nara Station’s East Exit. Once you exit, locate Loop Line Bus Terminal. It is super easy! The buses are colored bright yellow! Next, take number 2 service bus from bus stop number 2. This bus will take you to Nara Park in about 10 minutes for a fixed fare of 210 yen for adults and 110 yen for children.

Why not Pin it for later?

Have you been to Nara Deer Park? What additional tips can you share?

Let me know in the comments section below!

Make sure to click on the images right below to get inspired and to help you with the planning process.

top best things to do in japan

The deer are so cute 🙂 so much useful practical information here, I am sure we will visit and this will be a big help. Thank you!

To be honest, I spent more time feeding the deer and taking pictures of them then anything else while visiting Nara.
Thank you for commenting!

I loved that park! The deer are lovely, thanks for rekindling fond memories!

Cool! I am so glad you had a good time!

I see so many photos on instagram of these gorgeous little deer feeding out of people palms. I hope to gt to Japan in the next year, it’s really high up on my bucket list. I’m a big animal lvoer, so this place looks perfect, thanks for all the tips in this post.

Another excellent read on Japan – the Nara deer park is an experience and one that should not be missed!

Hands down! It is a great place to explore!