I have seen many images of Grand Canyon on Facebook and Instagram, and in print. However, there is nothing like standing at the edge of the rim and soaking it all in: the incredible depth, the dramatic vistas, the colors of red, rust and orange enhanced in the light of the setting sun. I honestly have to say that there are no “bad” viewpoints in Grand Canyon, they are all different and constantly changing as the light of the day and the weather patterns change.

However, I do have my favorite spots along the rim. I narrowed them down to the top 10 must-see viewpoints in Grand Canyon South Rim.

Yavapai Point sits at the most northerly section of the Grand Canyon South Rim. Consequently, you will get the best view of the famous three points: Cape Royal, Wotans Throne, and Vishnu Temple. In addition, look down the gorge and onto the serpentine Colorado River.

Mather Point is the busiest viewpoint in the Grand Canyon South Rim. However, it is one of the park’s most spectacular vantage points. The Colorado River is practically below your feet. To the west is Bright Angel Trail, to the east is the South Kaibab Trail, and straight ahead is the North Rim.

Maricopa Point sits on a narrow promontory extending northeast and then dropping vertically. The vistas towards east and west of the canyon are excellent here. In addition, the views extend all the way to the North Rim. Following is the view from Maricopa Point looking towards the west side of the Grand Canyon South Rim:

Furthermore, following is the view from Maricopa Point looking towards the east side. If you look towards the bottom left side of the picture, you will be able to see an interesting rock formation aptly named the Battleship. California Condors have been known to nest on the Battleship.

Hopi Point is one of my personal favorites. It is one of the best all-around viewpoints in Grand Canyon. Jutting out farther into the Canyon than any other point on the South Rim, Hopi Point offers incredible views. In addition, it is a great spot to come back to and watch the sunset. You will be able to catch all the reds, rusts and oranges of the canyon walls as the sun is setting down.

Moreover, Hopi Point offers excellent views of the stone “temples”. Temples, in this case, are rock formations rising from the depths of the canyon. If you look at the above photograph all the way to the horizon, you will be able to see the North Rim. Follow the North Rim up to the first indentation. This is Cape Royal. Cape Royal is a type of a temple formed when side-canyon erosion produces peninsula-like projection along the rim.

Afterwards, follow the horizon to the next temple. It is Wotan Throne. It was formed by erosion which transformed the peninsula into an island, and eventually, it was separated from the rim.

Finally, let your eyes wander to the last rock formation. It is called Vishnu Temple. Vishnu Temple was formed by further erosion, where the softer rock crumbles and undercuts harder rock.

If you thought that Hopi Point was good, just wait till you get to Mohave Point. Not only you will catch the dramatic vistas here, but also you will be able to see some excellent views of the river and rapids below.

In addition, stretching out below the lookout is a rocky promontory known as the Alligator, as it twists toward the river beyond. To the northwest you can see Hermit Rapid, created when the side of the canyon collapsed into the river.

The trail leading to the Abyss viewpoint travels along at one most scenic segments along the rim. In addition, it traverses very close to the edge of the canyon and you will be able to catch some great views all the way down to the canyon.
The Abyss lookout point is one of the most dramatic viewpoints in Grand Canyon. Notably, it is located on the very edge of the rim and gives you an almost vertical look down into the canyon below. In the distance you can see the Colorado River set against the backdrop of the layered rocks.

At Pima Point you will get one of the best views of the Grand Canyon South Rim and probably the most spectacular one of the Colorado River and rapids below. In addition, the views to the east are stunning.

Grandview Point stands tall at 7,100 feet. It is one of the highest viewpoints in Grand Canyon South Rim. In addition, it is the southernmost point on the canyon. The views are magnificent here. Grandview Point overlooks the dense forests and the Horseshoe Mesa.

By the way, Grandview Point is the start of Grandview Trail which leads to Horseshoe Mesa.

Once you reach Moran Point and glance all around you, you will get a true sense of the vastness of the Grand Canyon South Rim. Furthermore, directly below Moran Point sits Red Canyon and the colors are just staggering here. The reds, oranges and rusts glow beautifully especially in the afternoon sun. To top it off, the sparkling Colorado River finally makes longer appearance.

Finally, try to find the Sinking Ship, a fascinating geological formation which appears as if it was a sinking vessel against the setting sun.

By the way, Moran Point is named after Thomas Moran, a painter who traveled to the Grand Canyon with John Wesley Powell in 1873. If you like Thomas Moran’s paintings following is a website with a recap of his life and work: Thomas Moran

So, with not further delay, head to the tower. Inside you will find a spiral stairway which winds five stories high. Head straight to the top and as you are climbing the stairs look through many windows and see mile upon mile of magnificent views. By the way, the windows have reflectoscopes, which are viewing instruments that enhance the colors by using the black glass. Once you get to the top, check out the observation deck, which offers great views of the eastern part of the Grand Canyon South Rim.

MORE IDEAS FOR THINGS TO DO IN ARIZONA 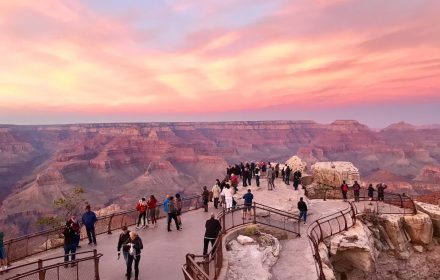 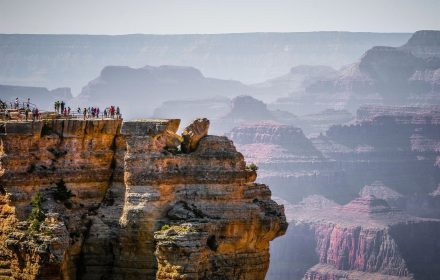 Amazing ONE DAY in GRAND CANYON (4 Things You Can't Miss)